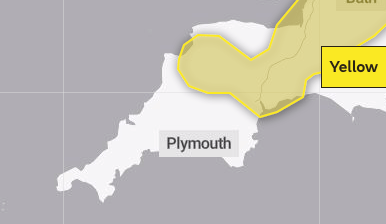 THE Met Office has issued a Yellow Warning of Ice and Fog for the South West of England from 4pm today, Sunday, December 11 until 11am tomorrow, Monday, December 12.

It says that freezing fog and patches of ice are likely to lead to some slow or difficult journeys on Sunday night and Monday morning.

• Some icy patches on some untreated roads, pavements and cycle paths

• Some injuries from slips and falls on icy surfaces

• There is a chance of delays or cancellations to flights.

Advice on what to do can be found at: https://www.metoffice.gov.uk/weather/warnings-and-advice/seasonal-advice .

Freezing fog is expected to become more extensive overnight and could produce significantly reduced visibility to 50-100 metres at times, as well as patchy ice on untreated surfaces.

Additionally, snowfall that is now easing near and over the Cotswolds, as well as isolated showers elsewhere may lead to some ice developing on untreated surfaces.

Although becoming less widespread and thick by lunchtime, some places may be affected by fog for the remainder of the day, particularly in Northern Ireland and northern England.

A yellow weather warning of fog and ice has been issued for tonight and tomorrow morning across the SW. (Image: OpenMatTiles and OpenStreetMap contributors via The Met Office )

Just a quarter of Devon teachers are men

29 November 2022
We use cookies on our website to give you the most relevant experience by remembering your preferences and repeat visits. By clicking “Accept All”, you consent to the use of ALL the cookies. However, you may visit "Cookie Settings" to provide a controlled consent.
Cookie SettingsAccept All
Manage consent