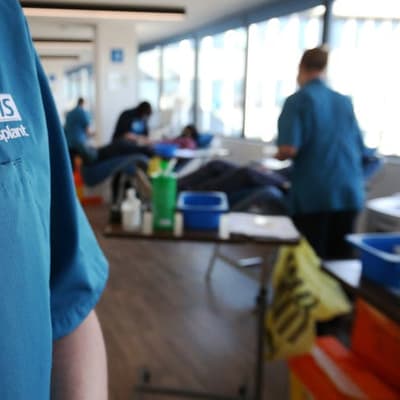 TEIGNBRIDGE’S pool of blood donors fell to its lowest level since at least 2016 last year, new figures show, as the NHS pushes for more people to register ahead of World Blood Donor Day.

Each year the NHS’s Blood and Transplant division publishes figures on donations ahead of the annual event, which falls on June 14 and raises awareness of the need for safe blood around the globe.

This year, NHSBT is calling for more donors to come forward after seeing a drop in donations across England during the coronavirus pandemic.

Figures from NHSBT show 2,163 people gave blood in Teignbridge in the year to March – the lowest number since at least 2016, when figures are first available.

The organisation said demand for blood dropped during the pandemic as hospitals suspended routine care – but more donors are now needed to due to a drop in recruitment and hospital activity picking up again.

The NHS is particularly short of blood types O negative and B negative, and is encouraging people to get tested to see if they have in-demand, rare blood that could save lives.

Head of blood donation marketing for NHS Blood and Transplant, Alex Cullen, said: ‘The NHS needs more donors over the next five years of all blood types.

‘A mass public campaign is being held this National Blood Week and throughout June to identify people with most needed blood types. This year we’re encouraging more people to donate and find out their blood type – it’s quick and easy.’

Across England, the number of blood donors has been declining for some time.

Blood donations are taken across the country, in established centres and by NHS roving blood donation teams.

Register to give blood and book an appointment by calling 0300 123 23 23, downloading the GiveBloodNHS app, or visiting blood.co.uk.