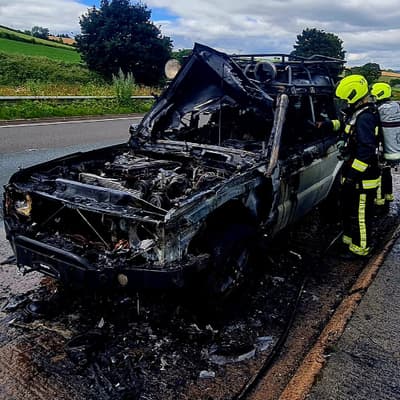 A QUICK thinking driver who managed to unhitch the trailer carrying a boat as his car caught fire has been praised by the fire service.

Buckfastleigh Fire Station has since released this picture of the car that was destroyed by fire on Sunday afternoon on the A38.

A spokesperson for Buckfastleigh Fire Station said: ‘The quick thinking driver managed to un-hitch a boat the vehicle was towing meaning only the car was damaged.’

After they had finished battling the blaze, the crew took a few minutes to pick up rubbish discarded by drivers and ended with a whole black bin liner full from only 20 metres either side of the car.

Fire control received a few calls to a vehicle on fire on the A38 at Dean Prior at 3.15pm.

A spokesperson from fire control said: ‘The owner had removed a boat on a trailer prior to our arrival.

‘Once crews from Buckfastleigh arrived the vehicle was well alight and parked in a layby.

‘Crews had two breathing apparatus sets, one hose reel jet and a thermal imaging camera in use but didn’t require the attendance of an appliance from Totnes.

Penultimate carnival event is days away

County show hits targets as visitors turn out in force

2 July 2022
We use cookies on our website to give you the most relevant experience by remembering your preferences and repeat visits. By clicking “Accept All”, you consent to the use of ALL the cookies. However, you may visit "Cookie Settings" to provide a controlled consent.
Cookie SettingsAccept All
Manage consent