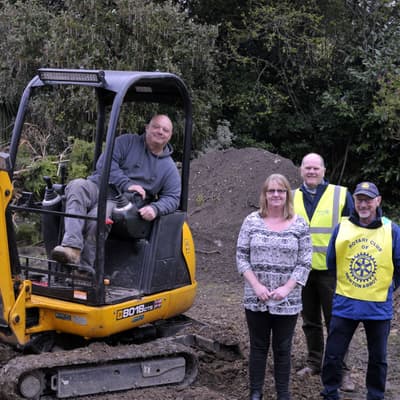 DIY SOS TV star Julian Perryman ‘Jules’ has dug in to help a deserving local cause.

A much-needed construction project has finally got underway thanks to the efforts of Newton Abbot Rotary Club and a dash of showbiz star power to boot.

On Tuesday, Rotarians Martin Smith and Jeremy Newcombe were on site at Meadowside Residential Home in Newton Abbot as Jules of DIY SOS fame began building an access point onto Brownhills Road for vehicles.

The home is adjacent to the narrow, single lane Brownhills Road which has been a major source of difficulty for the home for many years.

Meadowside Residential Home manager Michelle Hall said: ‘The lane has been an absolute nightmare at times, especially for the emergency services because they cannot get up and down it very easily, if at all.

‘The new access will make a massive difference, especially for the nurses, they really do struggle with parking.

The project, which will see an access point, carpark for four to five cars and green space built, has been in the works for many years and has at last started following funds from the Rotary club and Julian agreeing to take the job on.

‘It is much-needed and it’s absolutely amazing that it is finally happening, I have been here nearly 23 years and there has been a lot of problems with the lane,’ Michelle explained.

‘The access is going to open up Meadowside and allow us to be more community-based, we’re not very well established on the map even though we’ve been here for more than 30 years.

‘It’s going to help the residents because it’s going to be somewhere else for them to be able to communicate and interact with other service users.’

Rotarian Martin Smith, who is also a trustee of The Meadowside Charity, said: ‘Over the last five years we have raised enough money to build an access, there is no vehicle access, it’s very hard to get in, ambulances can’t get in for the residents, tradesmen can’t get in so it’s been a long time coming.

‘We’ve had some set backs, many stops and starts, but then I managed to get hold of Julian and it was like winning the lottery to find out that he was coming on board – it’s all systems go.’

An original DIY SOS team member, Julian heads up JT Perryman Groundworks a provider of comprehensive groundworks services and was brought in after having been put in contact with Martin.

Julian said: ‘What we are trying to achieve is the access but the access is difficult even from the point of view of doing what we’re doing.

‘You get people come along and help out on DIY SOS, they’ve got their own personal reasons for doing that and what they do here in the house is great.

‘My daughter is autistic, they work with autistic people in the house and so I’m very happy to have made the connection with Martin’.

The project is ongoing and both Martin and Julian, who resides in Liverton, are asking for local business to chip in and help.

‘We’ve had some local businesses support us already, Glendinning’s have given us hardcore, Sherwoods and O’Neill Holman but we just need a bit more support from a few local businesses,’ Martin said.

Sitting in the grounds is a brick-built hall, which has fallen into disrepair, which was the school hall in the early 1900s when the home was the children’s workhouse; with the help of Rotary Newton Abbot Club the home hopes to convert the hall into a local care & respite centre.