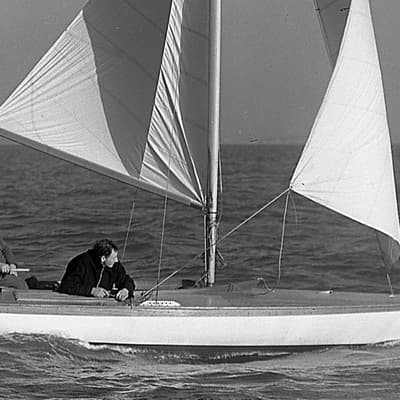 A DESCENDENT of Teignmouth’s foremost shipbuilders has died at the age of 95.

His niece Jane Shaddick described him as a ‘true gentleman’ with a ‘terrific sense of adventure’ who greatly influenced the lives of everyone he met.

Jane, who is the family archivist and working on the Morgan-Giles Heritage Project which is conserving the family history, was close to Robin and said he was like a ‘substitute father’ after the death of her own father.

The youngest child of Ivy and Frank Morgan-Giles, Robin, who wrote a history of his own life, said his mother prided herself on the fact her children could row almost before they could walk.

He was born at Cliffside, directly on the beach at Marine Parade, Shaldon and aged eight, was expected to row across the busy River Teign, contending with tides, lots of river traffic and large coasters, in his first dinghy to school, a dinghy built by his father during his break from service in the First World War.

This dinghy is now in the National Maritime Museum in Cornwall.

He attended Clifton College in Bristol from the age of 13 but the school was evacuated to Bude and he left aged 17 in 1943 and joined the Royal Navy.

He spent the rest of the Second World War working on a dispatch boat out of Milbay Docks in Plymouth until he contracted pneumonia.

After the war, he joined the Merchant Navy, hoping to see the world, but spent two years running a launch between Plymouth and Exmouth.

A brief stint working at the shipyard in Teignmouth didn’t see him ‘eye to eye’ with his father and he went on to obtain a mechanical engineering degree and a further career as a management consultant for 25 years.

But on his early retirement aged 55, his seafaring heritage returned which he described as his ‘second childhood’ and trying to ‘regain the childhood Hitler had taken away’.

For some years he worked delivering charter yachts to the Mediterranean but by the end of the 1980s, he decided to buy and convert an ex-RNLI lifeboat.

He converted the decommissioned Three Sisters and travelled around the UK and as far as the Outer Hebrides and Orkney Islands to the Isles of Scilly. His last few years were spent near his family at his home in Tonbridge, Kent.

One recollection from the Morgan-Giles Archive says when Teignmouth was heavily bombed during the Second World War, the shipyard was only affected once when bombs fell in nearby Powderham Terrace and the blast caused damage to the yard.

Robin and his father saw the attack from their home in Shaldon and immediately crossed over on the ferry.

He recalled how he was stationed by the entrance gates to keep guard over the valuable equipment.