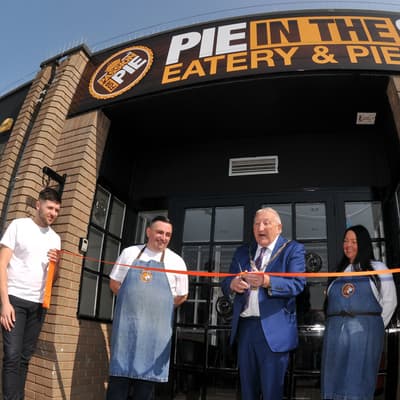 Crowds gathered on Friday afternoon for the grand opening of Newton Abbot’s latest restaurant – Pie in the Sky.

Located in Newton Abbot’s Market Walk, the eatery is headed up by Jason and Karen Winser of Passion for Pie – a local award-winning pastry business specialising in hand-crafted pies.

The eatery serves the companies beloved pies and has a licensed bar stocking an assortment of local produced drinks.

Passion for Pie owner, Jason Winser, said: ‘We’ve gone through so much over the past couple of years, I said one day I’ll have a place where people can sit and eat so it’s an absolute dream to be here although I thought it would remain a pipe dream.’

Also, there are pie-making classes coming down the pipeline as well as a series of ‘meet the producer’ type events.

, local producers who supply the eatery coming down and giving talks and engaging with customers.

‘It’s great that there are people like Jason and Karen who are opening a place up in the town, investing in a town like ours, in Newton Abbot, I wish them all the best moving forward.’

Passion for Pie came into being in July 2017 when owner Jason Winser lost his job and was struggling to find employment, his wife Karen and daughter Jean bought him a gift voucher for Exeter Cookery School where he completed a course all about pastry.

Following the course Jason made a pie for a friend whose comment of ‘I would have paid you for that’ got Jason thinking about whether he could make pies and sell them; he set about organising a market stall in Newton Abbot and produced his very first batch of pies.

Since then the business has gone from strength to strength winning numerous British Pie awards, including 3 Class Champions & Highly Commended Awards.