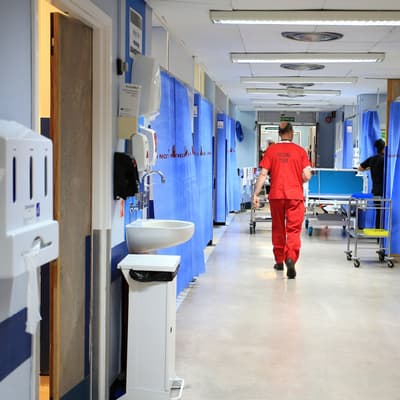 Tens of thousands of patients were waiting for routine treatment at the Torbay and South Devon Trust in April, figures show.

The Society for Acute Medicine said the current picture across the NHS in England – where 6.5 million people are waiting to start treatment – is “unacceptable and unsustainable” for patients and staff.

NHS England figures show 39,139 patients were waiting for non-urgent elective operations or treatment at Torbay and South Devon NHS Foundation Trust at the end of April – up from 37,251 in March, and 28,757 in April 2021.

The median waiting time from referral at an NHS Trust to treatment at the Torbay and South Devon Trust was 17 weeks at the end of April – the same as in March.

Nationally, 6.5 million people were waiting to start treatment at the end of April.

Dr Tim Cooksley, president of the SAM, said the healthcare workforce and its capacity are currently the key issues facing the NHS, but that the latest figures show there is no easy solution.

He added: “The current experience for patients with long waits for both emergency and elective care is intolerable and this is causing significant morale injury to clinical and operational staff in NHS and social care who wish to provide high quality care for patients.

“The current situation is unacceptable and unsustainable for patients and staff.

“It is essential that the Government urgently commits itself to the long-term solutions.”

Some 12,735 people were waiting more than two years for hospital treatment at the end of April – nearly five times the number waiting in April last year, but down from a record 23,778 in January.

The Royal College of Surgeons of England said this shows “light at the end of the tunnel”.

Tim Mitchell, vice president of the organisation, said: “Surgical teams have been working around the clock to reduce the enormous waiting list which built up during the pandemic.

“However, there are still big challenges ahead. As people return to the NHS, demand is only getting stronger.”

The Government has set the ambition to eliminate all waits of more than two years, except when it is the patient’s choice, by July of this year.

Separate figures show 1.5 million patients in England were waiting for a key diagnostic test in April – a fall from 1.6 million in March.

At the Torbay and South Devon Trust, 6,120 patients were waiting for one of 13 standard tests, such as an MRI scan, non-obstetric ultrasound or gastroscopy at this time.

Other figures from NHS England show that of 99 patients urgently referred by the NHS who were treated at the Torbay and South Devon Trust in April, 59 were receiving cancer treatment within two months of their referral.

A month previously – when 117 patients were referred – 74 were treated within 62 days.

In April 2021, 89 patients were treated within this period, out of 124 that were referred.

A spokesman added: “Good progress is being made on cutting waiting times with a two thirds reduction in the number of patients waiting longest for treatment since February.”