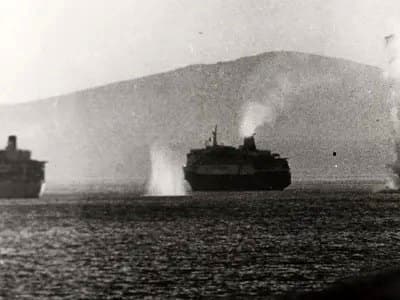 ‘WE were proud we had done the job we came for and trained for…’ this was the reflection of Falklands War veteran Dave Cair 40 years on.

Able Seaman Dave Cair was 20 at the time the Falklands Taskforce steamed down to the other side of the world to take the islands back from the invading Argentinian forces.

Dave, now aged 60 and vice chair of the Newton Abbot branch of the Royal British Legion, spoke to the Mid-Devon Advertiser about the part he and fellow servicemen played in the recapture of the Falkland Islands.

He served aboard HMS Intrepid as an Able Seaman (radar operator).

The ship, that was the second Royal Navy ship to sail into Falkland Sound and Carlos Bay during the main landings, was also hit by a 1,000lb bomb, that fortunately did not go off.

Dave recalls: ‘I had just been drafted aboard HMS Intrepid on March 29 for shore time as the MoD was intending to mothball her, but all that was about to change when everything kicked off.’

‘We had a skeleton crew and half of them were on Easter leave.’

A ‘frantic fortnight or so’ of preparations followed in Portsmouth Harbour to get the ship battle ready.

‘Following the invasion (on April 2, 1982) men were suddenly recalled from all corners of the country.

‘There were no mobile phones or internet then so messages were left at stations and with relatives so men were arriving back from all four quarters asking what was going on.

‘The main task force left on April 5th and we were absolutely nowhere near ready because we were so close to being mothballed and nothing worked.

‘We spent the next three weeks working 24/7 getting restored and re-fitted – everything up to scratch. We even drafted in people to help from the detention quarters in Portsmouth Dockyard and had lorries flying in from everywhere.

‘We sailed on April 25th in what was essentially a World War 2 vessel but we had worked hard.

‘We had more time to prepare for going to war by the time we left and so we did do it by the handbook so we were ready.

‘We had a crew that had been rapidly put together and none of us had worked together before or even knew each other.

‘We worked all that out on passage and held firing exercises and drills so we were a fighting ship by the time we arrived in the Falklands.

‘Because we left after most other people we were fully loaded with extra rockets, ammunition and fuel supplies for other ships that had gone on ahead. ‘I thought, one spark down here and we’d go up in smoke.

lands were because I was aware of “Operation Journeyman” in the late 1970s involving the Argentinians.

‘We thought that by the time we get there it might be all over and the Argentinians would have surrendered, but it was far from that.

‘A week after we set sail the General Belgrano (The Argentinian ship) was sunk.

‘I hate to say this now, but most of us were pleased we struck that blow.

‘Attitudes have changed since and we realise they were all poor sailors doing the same job we were.

‘Then, of course, two days later the HMS Sheffield gets hit.

‘That’s when it became real for us. They’d got one of our ships!

‘There was a guy on the Sheffield who I went to school with.

‘So that’s the sort of stuff that really hits you and it did me.

‘It affected me in later life because I think you get a bit of survivor guilt to be honest. But I’m ok.

‘None of this has hit me in the long term as I do not PTSD or anything like that.

‘Just before the landings we were cross decking SAS men from HMS Hermes to us by Sea King in the dark and it hit an albatross and crashed into the water about four seconds later.

‘People on our ship heard the crash and 18 service people lost their lives and nine survived.

‘We were all on the upper deck looking out for survivors, trying to hear people in the water.’

The task force was under threat from the Argentinian airforce and Exocet missiles.

But Dave added: ‘We were a landing ships and it was the job of the other ships to look after us, which they did.

‘On the night before we landed we were the second ship into Falkland Sound and Carlos Water.

‘We had, I think, HMS Yarmouth in front of us and they must have felt like they were sacrificial lambs because of the threat of mines. The area had been swept but you never know whether everything has been found.

‘That first time into San Carlos we were at Action Stations for 20 hours on the first day.

‘From then on there was the realisation “Blimey people are really shooting at us now” amid the air raid warnings.

So called ‘friendly fire’ meant they were hit by machine gun fire and came close to being hit by a sea cat missile in the chaos of action.

‘We got hit by a 1,000lb bomb below the water line, apparently it had hit us and not gone off or else we would have been sunk. This was something I found out about years later”

‘There were a lot of guns going off and ships being shaken about, but you don’t know exactly what’s going on above you when you’re in a dark room on a ship trying to operate the radar.

‘Radar was my job but when I wasn’t doing that I was wandering around the ship, helping with whatever I could from landing craft to whatever was needed.

‘I was 20 years old and felt I was invincible.’

Doing a tea run for the people on duty he came into the ops room carrying a big urn of tea and everyone was on the floor.

‘We were in the middle of an air raid so everybody’s taking cover and there I am standing there with my tea urn wondering what to do.’

Fortunately he survived that and other dangerous moments.

‘We had warnings about the directions of air raids and could move around in the hope of putting as many bulkheads between us and the enemy as possible.’

‘You get lots of pep talks and training and this was something we had been trained to do so I wanted to prove that I could do what I was trained to do.’

The Argentinians surrendered on June 14 and Dave and the rest of the crew received a hero’s welcome when they sailed back to Portsmouth.

On completion we had a lot of the prisoners on board and we were just looking at them thinking: “They’re just like me, and they are kids but colder and wetter than we were”.’

With hindsight he said he thought he would like to go back to the Falkland Islands.

With reflection he says: ‘I never was a Margaret Thatcher fan, but she was the right lady at the right time.

‘When you look at the state of the Navy today, we certainly could not do an amphibious landing like that again, we haven’t got the ships to do it any more.

Six months later though the Hermes and Invincible would have gone the same way planned for the Intrepid and would have been sold or scrapped.

‘I think there is a certain amount of pride that we did the job we had to do and had been trained to do.

‘We defended our own territory, we were not going into a foreign country to fight a war we had nothing to do with.

Dave received the Falklands Campaign medal – by the post – and served just over 16 years in Royal Navy, leaving the force as a Leading Seaman. He moved to Newton Abbot in 2000 and now works for Hotline Electric Fencing at Heathfield.

As well as being vice chair of the Newton Abbot branch of the Royal British Legion, Dave is Branch Community Support representative, providing welfare and bereavement support for ex-service people and their families.

Dave spoke with pride that he had been called on for service one more time in 2015 for the funeral service of Rear Admiral Peter Dingemans, who was Captain of the Intrepid during the Falklands War.

The HMS Intrepid Association was responsible for providing the pall bearers.

‘We were strange men who hadn’t seen each other for years but we worked together one last time for the man who took us to war and this was something we could do for him.’