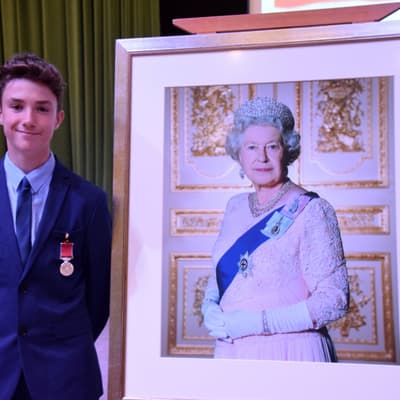 A DEVON boy has received the British Empire Medal (BEM) after spending more than two years sleeping in a tent for charity.

Twelve-year-old Max Woosey is among 11 Devon residents in the Queen’s New Year’s Honours who received MBEs and BEMs from Her Majesty’s representative in Devon, Lord Lieutenant David Fursdon, in a ceremony at the Royal Marines Commando Training Centre in Lympstone last week.

‘It feels absolutely incredible to be awarded this,’ said Max, from Braunton, who has raised over £640,000 for the North Devon Hospice since his marathon camp started.

The idea came about when a tent was gifted to him by his elderly neighbour and family friend Rick Abbott, just before he died in 2020.

Max promised him he would have his own adventures with it and has stayed true to his word, spending every night in the tent since March that year, including stays at London Zoo and the garden of 10 Downing Street.

Speaking at the award ceremony, Max added:  “I never thought [sleeping in the tent] would last this long. It’s been an incredible experience though, and I’ve not regretted any of it. I’m so grateful to everyone who has donated.”

His fundraising efforts have so far raised enough money to fund 16 community nurses for North Devon Hospice. When asked what’s kept him going, especially during bad weather, Max said: ‘Knowing that the money was going to such a good cause.’

Also attending the ceremony and receiving awards were:

Andrew Willard, Plymouth, who received a Member of the British Empire, MBE, for services to HM Prison and Probation Service.

l Verna Pollard, Plymouth, a foster carer who received an MBE for services to children.

Dr Miles Joyner, Exeter, Founder of the Exeter Leukaemia Fund, who received an MBE for services to people suffering from blood cancer in Devon.

Janet Webber, Sidmouth, Director of Development for The Mission to Seafarers, who received a BEM for services to women in the international maritime sector.

Emma Jones, Plymouth, who received a BEM for services to the community in Plymouth during covid.

Gerald Millington, Otterton, who received a BEM for services to local history in Devon and Hertfordshire.

Jill Diprose, Dawlish, who received a BEM as Founder of ‘Activities Interests Music Support’, for services to families of children with special needs in Dawlish.

Brian Stanley Smith, Newton Abbot, who received a BEM for services to the community in Newton Abbot, particularly during covid and his work on the Newton Abbot Talkng Newspaper, Dyrons Journal.

The Lord Lieutenant said handing out such awards to people is one of the best things he does.

Mr Fursdon added: ‘Being able to thank these individuals for what they have done, show recognition for them … what can be better than that?

‘What this does is highlight the quieter, steadier people who just, in their communities, deliver year-on-year services to their fellows and peers.

‘These are modest people. They don’t seek the lime light, and some may even be embarrassed to be here today. I love that understated nature, and yet there they are, delivering day after day after day.

‘People have stepped up during covid in a way that you would not have imagined, and the number of people who have learned to volunteer and are now appreciated by their community has increased.

‘In a world full of bad news, this is just unalloyed good news, isn’t it!’