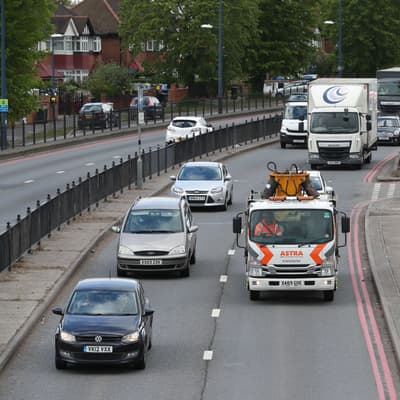 Emissions caused by cars, trains and other vehicles in Teignbridge fell by a record amount in 2020, new figures show.

Friends of the Earth said though a national drop in transport emissions is not surprising due to successive lockdowns during the first year of the coronavirus pandemic, the Government should do more to encourage people to switch to electric vehicles or ditch their cars entirely as emissions rebound.

Department for Business, Energy and Industrial Strategy figures show transport – including cars, trains and other modes of travel – caused 312 kilo-tonnes of carbon dioxide equivalent (ktCO2e) emissions in Teignbridge in 2020.

This was down from 399 the year before and the largest decrease since 2005, when records began – that year, transport emissions hit 405 ktCO2e.

Carbon dioxide equivalent determines the amount of CO2 that would need to be emitted to equal the same global warming potential of other produced greenhouse gases.

Road vehicles accounted for 97% of transport emissions, while diesel-powered trains produced a further 3%.

Friends of the Earth attributed the dramatic fall to the general public travelling less during lockdown.

“Ministers must do more to help people switch to electric vehicles or, better still, encourage them to leave their cars at home by providing better public transport and making it safer to walk and cycle,” added Mr Childs.

“This would boost our energy security, cut soaring bills and slash the dangerous emissions that are warming our planet.”

A Government spokesperson said: “We have committed unprecedented funding to encourage walking and cycling, as well as to accelerate the roll-out of electric vehicles – both vital steps to reaching our world-leading net zero targets.

“This includes the £2.5 billion rollout of zero-emission vehicles and charging infrastructure across the country, ensuring the switch is as simple as possible for motorists.”

Of this, 43% was caused by transport, while commercial emissions accounted for 4%, industry produced 12% and domestic use 24%.

The average person in Teignbridge produced five tCO2e in 2020.

Last chance to have a say on town centre

2 July 2022
We use cookies on our website to give you the most relevant experience by remembering your preferences and repeat visits. By clicking “Accept All”, you consent to the use of ALL the cookies. However, you may visit "Cookie Settings" to provide a controlled consent.
Cookie SettingsAccept All
Manage consent