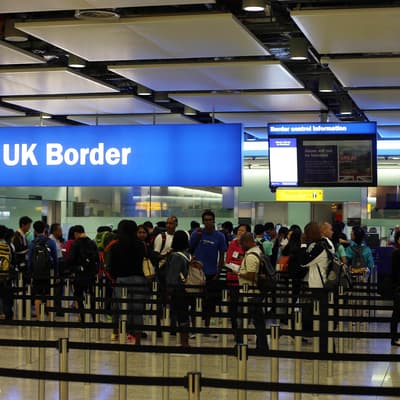 DOZENS of visas have been issued for Ukrainian refugees to stay with Teignbridge residents, new figures show.

The Ukraine Sponsorship Scheme, also known as Homes for Ukraine, was announced in February by the UK Government, allowing citizens to volunteer to house refugees fleeing the war in Ukraine.

Sponsors agree to offer accommodation for at least six months, with those receiving sponsorship allowed to live, work and study in the UK for up to three years.

Provisional data from the Home Office and the Department for Levelling Up, Housing and Communities shows that 24 visas had been issued for refugees staying with hosts based in Teignbridge as of Wednesday (April 6).

They were among the 12,500 sponsorship visas issued nationally by Thursday (April 7), though just 1,200 refugees – less than 10% – had arrived in the UK through the scheme by April 5 – the latest point at which data on arrivals is available.

The Home Office and DLUHC cautioned that a very small number of visas issued across the UK had no postcode linked to them, while the data is likely to include some duplicate records and therefore may not be an exact record of the number of people with visas.

Many others have received visas through the Ukraine Family Scheme, which allows Ukrainian nationals to join family members in the UK.

Some 28,500 visas have been provided under the scheme nationally, of which 10,800 people had arrived by April 5.

Local data on this scheme has not yet been made available.

The UK Government has been criticised for not doing enough to help Ukrainian refugees compared to other European countries, with logistical difficulties causing a backlog in visa applications.

As of April 7, the Government had received nearly 80,000 visa applications for both schemes but had granted just 40,900.

The Home Office acknowledged that some people have been waiting nearly three weeks for their application to be processed, but said that it is working to speed up the process.

Sir Ed Davey, leader of the Liberal Democrats, called on Home Secretary Priti Patel to resign over issues with granting visas to refugees.

‘We want to offer Ukrainians a home, but Priti Patel has slammed the door in their face,’ Sir Ed tweeted.

The Home Secretary apologised for delays in processing visas, but added that the Government has to ensure they are ‘protected and safeguarded’.

The Local Government Association, a membership body for local authorities, praised the ‘extraordinary’ generosity of people across the country, but warned councils need information on arrivals and those supporting them as quickly as possible.

James Jamieson, LGA chairman, added: “Councils are only currently being told who is arriving in their local area under the Homes for Ukraine scheme when matches are made and visas granted, with many reporting significant issues with this data.”

‘Urgent work is needed on how councils can work with government and the community, faith and voluntary sector so those offering their homes can be quickly matched with a family in need,’ he added.