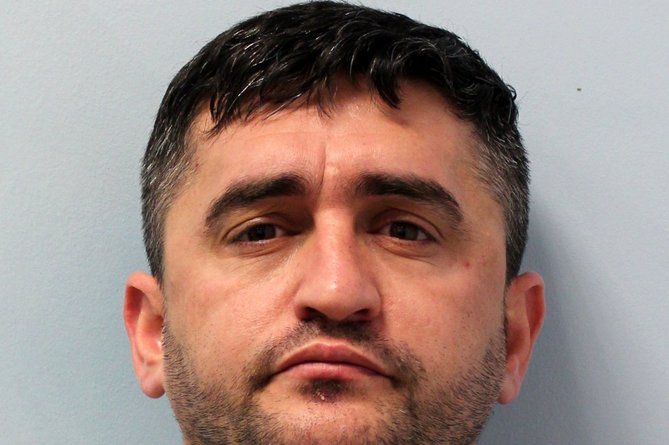 A PEOPLE smuggler has been jailed for organising a trip which ended in eight migrants being shipwrecked on Horse Cove, Teignmouth.

Indrit Barhani acted as middleman between an organised crime gang in Belgium and yacht skipper James Wisbey who crammed the Albanians onto his 27-foot sloop Sea Crystal.

Barhani arranged payment for repairs to the yacht’s engine before the smuggling trip in which the migrants were picked up from the French coast and taken across the Channel.

They almost drowned when the overloaded and underpowered yacht was caught in a storm off the Devon coast on December 17, 2020, and foundered at Horse Cove.

The terrified passengers scrambled ashore and crossed the main Paddington to Plymouth railway line before climbing a cliff, where they were arrested by Border Force agents and police.

The final stages of the doomed trip were monitored by police and coastguards, who filmed the yacht from a helicopter as it was driven ashore by gale force winds.

The eight terrified migrants were squeezed into a tiny cabin a saloon and had almost nothing to eat or drink, Wisbey prevented them calling for help as the Sea Crystal headed for the shore. They had all paid 20,000 Euros for the trip.

Illegal immigrant Barhani was traced through his phone contacts with Wisbey and police then found other messages arranging to get the migrants to the boat.

Wisbey, aged 56, and Miles, aged 39, both from Plymouth, were jailed for five years, four months, and two years respectively at an earlier hearing.

The Judge told Barhani: ‘Everyone knows that this is a very dangerous enterprise indeed. No matter what boats or craft are being used, peoples’ lives are put at risk.

‘There is a wider public policy issue here and no matter what the actual risk or danger, the court has to take a serious view of those who involve themselves in illegal trafficking.

‘There is not enough evidence to suggest you were leading this or that it was your business or you were pulling all the strings, but you did make arrangements.’

Miss Rachel Drake, prosecuting, said Barhani acted as ‘fixer’ for the Belgian based gang, who he communicated with in phone messages in Albanian. There were also messages in English to Wisbey arranging the ill-fated trip.

Mr Irfan Arif, defending, said Barhani himself had been smuggled into Britain on a lorry in 2014 and had overstayed after an appeal against deportation was not pursued.

He was due to get married in Britain before his arrest but will now face deportation to Albania when he finishes his sentence.

Police have released aerial footage shot from the police helicopter and a drone of the Sea Crystal just before it came ashore.

The footage shows the underpowered sailing boat struggling through heavy seas under engine alone and with the sails furled.

Other images show the basic conditions in the cabin and for’ard double berth in which the eight migrants were crammed during the highly dangerous voyage from France.

Immigration officials and police waited at the top of cliffs at Horse Cove, Teignmouth as the terrified, hungry and bedraggled migrants staggered ashore.

They used body cams to film them as they asked for water and food and told officers they had paid 20,000 euros apiece for the illegal voyage.

2 November 2022
We use cookies on our website to give you the most relevant experience by remembering your preferences and repeat visits. By clicking “Accept All”, you consent to the use of ALL the cookies. However, you may visit "Cookie Settings" to provide a controlled consent.
Cookie SettingsAccept All
Manage consent