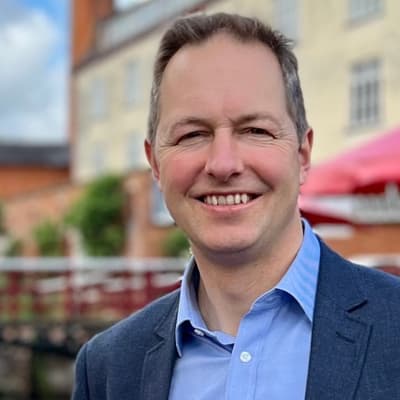 FORMER soldier Richard Foord said the Lib Dems have sent a ‘shockwave’ through British politics after winning the by election in Tiverton and Honiton in the early hours of this morning, Thursday.

Overturning a Conservative stronghold to win with a majority of 6,144, he thanked his ‘incredible team’ for their work.

In his victory speech, Mr Foord said: ‘When Boris Johnson could be fighting for farmers, for our NHS and for rural services, he’ll be fighting once again to save his own skin.

‘I also have a simple message for those Conservative MPs propping up this failing Prime Minister:

‘The Liberal Democrats are coming.

‘If you don’t take action to restore decency, respect and British values to Downing Street, you too will face election defeats like the one we have seen here tonight.

‘It is time to do what’s right for our country. You know in your heart that your leader is not the person to lead this great nation into the future.’

Voters in Tiverton and Honiton had gone to the polls yesterday to choose a new MP following the resignation of Conservative MP Neil Parish the MP since 2010, who admitted watching pornography on his mobile phone in the House of Commons chamber.

Conservative Helen Hurford had been defending a majority of more than 24,000 against the challenge from the new MP, Liberal Democrat Richard Foord.

Liberal Democrat leader Sir Ed Davey had said he was confident they were ‘neck and neck’ with the Tories on the eve of the vote.

Residents are ‘fed up of Boris Johnson’s lies and neglect,’ he said, as he called on them to back his party’s candidate, Richard Foord.

The Prime Minister, Boris Johnson had urged voters to ‘stick up for British food and farming’ by supporting Tory Helen Hurford, a former headteacher.

Shortly before the Devon results were announced Labour’s Simon Lightwood had won the Wakefield by election from the Conservatives with a majority of 4,925.

Earlier, Prime minister Boris Johnson suggested it would be ‘crazy’ for him to resign if the Conservatives were dealt a blow by losing in Devon.

Tiverton and Honiton result in full:

Frankie Rufolo, The For Britain Movement – 146

“I’d like to thank the Returning Officer, her staff and my fellow candidates for

a well run election and count.

“To my wife Kate, and our three wonderful children – thank you. I couldn’t have done

“I’d like to thank my election agent Simon Drage, my incredible campaign team, the

local party members and Liberal Democrat supporters here in Tiverton & Honiton, and the thousands of Liberal Democrat campaigners from across the country who came to volunteer with me here in Devon.

“Tonight, the people of Tiverton & Honiton have spoken for Britain. They’ve sent

a loud and clear message: It’s time for Boris Johnson to go. And go now.

“Ours is a great country and there’s no greater part of it than Devon. But every

“Communities like ours are on their knees. Every one of us standing on this stage

tonight has heard the pain people are suffering as the cost of living crisis starts to bite.

“Yet when Boris Johnson could be fighting for farmers, for our NHS and for rural

services, he’ll be fighting once again to save his own skin.

“The Liberal Democrats are coming.

“If you don’t take action to restore decency, respect and British values to Downing

Street, you too will face election defeats like the one we have seen here tonight.

“It is time to do what’s right for our country. You know in your heart that your

leader is not the person to lead this great nation into the future.

“Across the country, the Liberal Democrats are taking on the Conservatives and winning.

fed up with being taken for granted.

“Thousands of Labour voters, choosing to lend their votes to the candidate with the

best chance of beating the Conservatives.

for everyone, not a daily parade of self-serving chaos.

“All of them, voting for the Liberal Democrats.

“These are difficult times for our country.

“The cost of living crisis – as we know here in Devon – is hitting hard: people forced

to choose between filling up their car, or putting food on the table.

“Our local NHS is teetering on the brink.

“Our rural economy is in a precarious state with people’s livelihoods at risk.

“Our country is crying out for leadership.

“I served as an officer in the British Army for 10 years Mr Johnson.

“I can tell you that leadership means acting with decency and integrity. It means

keeping your word. It means setting an example and putting other people’s needs before your own.

“I served alongside friends who personified these values, and laid down their lives

in service of their country.

“And yet your behaviour Mr Johnson, makes a mockery of leadership. By any measure,

“The people of Tiverton & Honiton have told you tonight that enough is enough. They

“The only decent course of action left open to you is to heed their call and resign.

“I want to pay tribute to Ed Davey.

“Ed, thanks to you the Liberal Democrats are taking on Boris Johnson across the blue

wall and winning. From Chesham & Amersham to North Shropshire to here in Tiverton & Honiton.

“You believed from the start that this result was possible. You rallied our troops

“Whether it is on the streets of Seaton or Bampton, Honiton or Branscombe, Axminster

or Tiverton, you have led the charge for change.

“But finally, and most importantly of all, thank you to the people of Tiverton &

Honiton, and everyone in our part of Devon.

“For your support throughout this campaign.

“For putting your faith in me to be your champion in Parliament.

“As your local MP, I promise I will work tirelessly for you. I will always put local

people and our communities first.

“Whether you supported me or supported someone else, I want to let you know, I’m

here to represent you and to stand up for everyone in Tiverton & Honiton.

“I will never take you for granted.

115 Aldi jobs up for grabs in Devon

8 June 2022
We use cookies on our website to give you the most relevant experience by remembering your preferences and repeat visits. By clicking “Accept All”, you consent to the use of ALL the cookies. However, you may visit "Cookie Settings" to provide a controlled consent.
Cookie SettingsAccept All
Manage consent