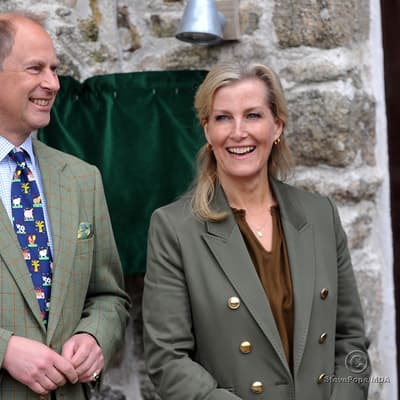 A FARM on Dartmoor that helps disadvantaged children received a royal seal of approval on Tuesday.

The Earl of Wessex, Prince Edward, and his wife, the Countess Sophie, made an official visit to East Shallowford Farm just outside Widecombe-in-the-Moor to mark the official opening of the Farm Development Project.

The couple were shown around the farm, which is run by the Shallowford Trust, a charity that organises visits for disadvantaged children from London to experience life and work on a farm.

They paid particular attention to the daily routine of each person they spoke to as well as their favourite job, activity and role was on the farm and why.

One girl proudly proclaimed feeding the pigs and piglets was her favourite job.

Prince Edward spoke to two youngsters building bird boxes and when asked what they thought of the farm, one boy said: ‘I like the atmosphere here’ and another girl said: ‘I absolutely love it here.’

The Earl also asked about the types of birds nesting in the area.

The Countess spoke to a group of children and picked their brains about whether they watched any farming programmes on the television.

The Prince then chatted with a group of volunteers, led by Martin Stallard, a green recovery volunteer, who were repairing a dry stone wall.

When asked if he would like to put a stone in the wall the Prince was happy to help but when asked if he’d like a pair of gloves the Prince said with a smile: ‘depends how many stones you want me to do’.

Coming to the end of their tour, the Earl and Countess gave a speech to the large mass of people in the courtyard.

The Countess joked: ‘There are more people than animals here today’ which received a healthy applause.

Shallowford Trust trustee and Widecombe vicar Geoffrey Fenton said: ‘I have been in Widecombe for 10 years and I’ve been a trustee for almost as long.

‘Today is a culmination of all our hard work and a reward in a sense because we started with a couple of derelict buildings and we’ve finally found the funding to make them habitable and the groups are coming and the vision is coming to fruition.

‘It’s been a very long, long haul and the key thing is the people, it’s Dartmoor at its best, the communities on Dartmoor are really strong because it can be hard to make a living here.

‘It is beautiful but it is a tough place to be and we’re succeeding which is great.’

Shallowford Farm is a medieval working hill farm deep in the Dartmoor National Park providing a range of experiences for young and old, typically part of a residential or day visit to the farm. The farm, which is also a charity, takes in children from inner city areas who have never experienced time in the open country.

Youngsters get to see a working farm with livestock and learn how to care for the animals, from feeding and watering, and clearing out stables.

A spokesperson for Shallowford Farm said: ‘The visits to East Shallowford provide many opportunities for new learning and new experiences.

‘The young people who come here may live in concrete housing estates without a view, but on the farm they have weighed lambs, witnessed the birth of calves, rebuilt dry stone walls, learned to take responsibility for animals and become part of an ongoing working community.’

As well as learning about how a farm is run and where their food comes from, children can also take part in challenging activities including mountain biking and horse riding.