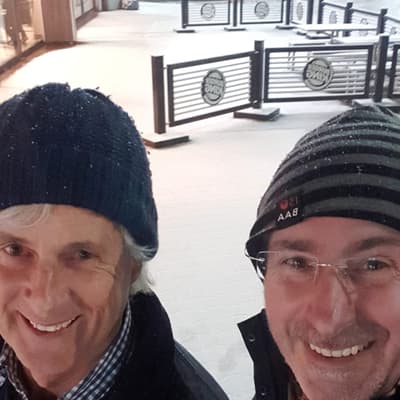 THROUGH wintry driving conditions and long nights Newton Abbot Rotarians Nick Richards and Phil Millichap have delivered thousands of vital pieces of medical equipment and personal items to Lublin in Poland which will be transported on to people in Ukraine.

Here Nick tells the story of their mission to help the victims of the war:

ON Saturday morning at 9.15am (Poland time), Rotarians Phil Millichap and Nick Richards drove their vans up the ramp to the Help Ukraine Centre warehouse in Lublin.

The offloading of 220 boxes containing much needed medical and personal hygiene items for people in Ukraine marked the end of the Rotary NA Ukraine Appeal launched just 23 days earlier!

The staggering response to this appeal from Rotarians, individuals and organisations resulted in large quantities of items being transported. 27,447 nappies packed in many boxes.

Other boxes containing bandages, plasters and gauzes had a combined weight of 77.2kg! The total weight of items transported in the vans was 2.42 tons.

Nothing was left in the Sparkworld warehouse when the vans departed for Poland.

Using Eurotunnel early evening meant Phil and Nick were able to drive to Venlo, a city in the south east of the Netherlands near the German border.

Driving conditions were difficult due to adverse weather.

Not being able to sleep in the vans for more than three hours due to the cold, Phil and Nick set off again at 3.45am, Friday morning, crossing the German border and on to Berlin.

Two hours sleep in the vans, midday, was sufficient for Phil and Nick to start driving again to reach Warsaw just before midnight.

After another three hours of sleep, Phil and Nick set off on the final leg at 3.30am, Saturday morning, from Warsaw to Lublin.

A journey which took 4 hours 15 minutes to complete!

Phil and Nick returned to the UK, emerging from the Eurotunnel in Folkestone, just before 9am Sunday morning.

Your contribution has made a huge difference.

As the boxes were unloaded from the vans, they were placed on new pallets, cellophane wrapped and labelled for delivery to Lviv the following morning.

By now, they will have been distributed and used to help relieve some of the suffering being experienced by individuals in Ukraine.

Thank you again for supporting this initiative.

Featured on this page are a few photos which document the journey.