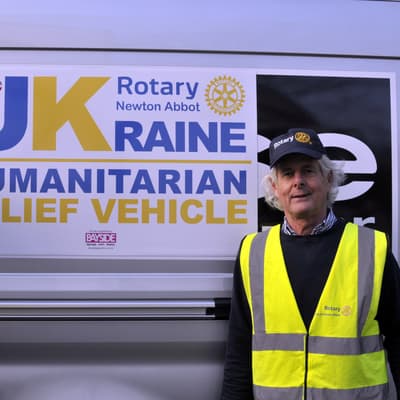 Rotarian Nick Richards, who drove one of the vans, said: ‘It’s been a phenomenal effort from everybody in Newton Abbot and beyond, we’ve had donations from Redruth, Axminister, London, Wales and many of the Rotary clubs in the Devon and Cornwall area

‘The support of everybody: businesses, individuals, the Rotary club and just ordinary members of the wpublic has been amazing and very humbling – I’m very grateful for it.’

Nick and Phil, waved goodbye by fellow members of Newton Abbot Rotary Club, and headed for a designated warehouse in Poland run by a help centre.

The centre, located in Lublin in eastern Poland approximately 140 kilometres from Lviv, was set up by Ukrainian businesses and runs a 24-hour operation to help those in need.

Driver of the second van, Rotarian Phil Millichap echoed Nick’s comments saying: ‘I think we are just really touched, I mean Newton Abbot is just an absolutely fantastic community, and the response from the community is, I don’t know, I’ve lived in lots of other places but I think there is a special sense of community in Newton Abbot that’s just really lovely to see.’

Newton Abbot Rotary Club have been conducting their Ukrainian-based operations out of a warehouse based in Heathfield, Newton Abbot.

Sparkworld, a domestic appliance retailer and wholesaler with two premises in the UK, lent the Rotary club the use of its Heathfield warehouse.

‘They’ve been hugely helpful, they helped load the vans this morning [March 31] they’ve been picking up stuff and the other thing that’s fantastic is, because they’re open, we’ve been sending deliveries straight here – they’ve been brilliant.’ Phil added.