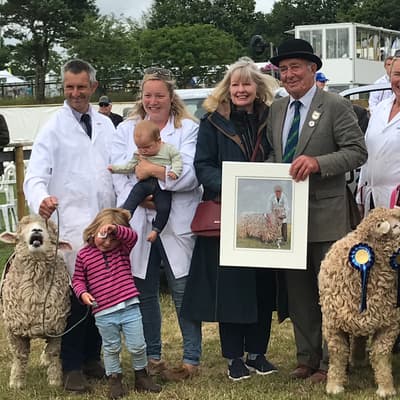 DEDICATED service to Devon County Show of more than 60 years was rewarded when a retiring steward was presented with a painting of himself with one of his curly-haired sheep.

It was Edward Darke last day as a steward at the show today, Saturday.

And after the grand parade of livestock in the ring, show president Tom Hammitt presented him with a painting of himself with one of his sheep.

It was a special commission for artist Sara Cartright from Ashcombe near Dawlish.

The farmer from Kingsbridge who keeps Devon and Cornwall longwools, started as a sheep steward 62 years ago. Latterly he has been in charge of a team of more than 100 stewards at the show.

He farms at Coleridge Farm at Chillaton near Kingsbridge.

His whole family were at the show to see him presented with the painting, along with many of their sheep, the Devon and Cornwall Longwools. The whole family are involved in keeping them.

Edward said: ‘I started off stewarding the sheep and then they promoted me to the chief steward for the sheep. Then in 1984 I was taken on as chief steward of all the livestock.

‘It has been bloody hard work! It means I’ve got about 100 stewards under me and it is really teamwork. It is about organisation. I couldn’t do it without the team.’

RNLI fundraiser thanked for years of service and thousands raised

17 October 2022
We use cookies on our website to give you the most relevant experience by remembering your preferences and repeat visits. By clicking “Accept All”, you consent to the use of ALL the cookies. However, you may visit "Cookie Settings" to provide a controlled consent.
Cookie SettingsAccept All
Manage consent