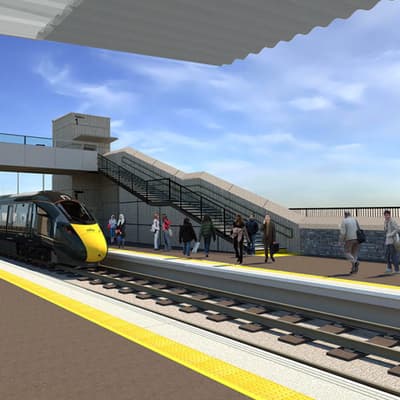 PLANS for a new footbridge over Dawlish railway station have been modified by Network Rail as costs of stainless steel rocket.

The updated design will feature a lift, the first time one has been available at the 1846 built station.

But the new designs, which feature a glass parapet, have prompted criticism for failing to provide a roof.

Network Rail, which is behind the upgrade to the station, justified the decision by saying adding a ‘suitably robust’ roof would make the structure almost as large as the listed station building.

The current footbridge, which does have a roof, will remain in place.

But critics argue the new roofless design will not offer protection in bad weather which would not be ‘much fun’.

Fears were also expressed that a first storm could render the lifts out of action if flooded and that they appeared ‘far too exposed’.

Others have complained that the design is not in keeping with the historic station and the Conservation Area.

Cllr Ros Prowse, who has been involved with the railway station and services as a representative of both the town council and district council, said the design had to be ‘sympathetic’ to the Conservation Area. While she was complimentary about the ‘fabulous’ sea wall, she said: ‘There have been a lot of complaints about the new bridge not having a roof.

‘This means when it rains, anyone disabled needing to use the lift, will be soaked. This is not what we were originally promised.’

The new design is more slender than the original proposals from 2020 which will mean the bridge is simpler and quicker to build and in use sooner.

Proposals for the updated structure use less stainless steel which has more than trebled the cost since the project began.

Passengers will be able to get better views of the area with the addition of a 1.8 metre high stainless steel and glass parapet. Lift shafts will be finished in grey textured concrete to blend in with the new sea wall.

A spokesman for Network Rail said: ‘Along with the platform improvements, it will bring huge benefits to passengers, especially those in wheelchairs, using pushchairs or carrying heavy luggage.’

The parapet on the bridge span is said to offer a ‘degree’ of shelter against the weather.

The spokesman added: ‘The new sea wall itself with the recurve units will mean the station will be protected significantly more than before.

‘The wall has been designed to reduce overtopping by 90 per cent in today’s conditions.’

Although the previous design had planning permission, the new design will be subject to consent from Teignbridge Council planners.

If approved, the new bridge will be installed next year.