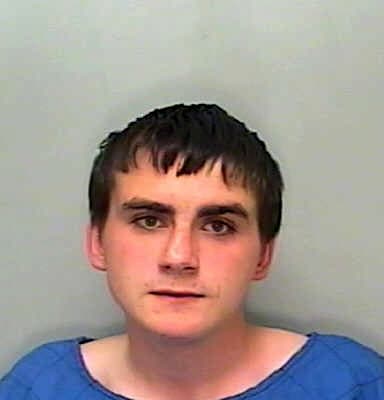 AN angry son who pushed his wheelchair-bound father under a bus after three days of family squabbles has been sent to a Dawlish mental health hospital.

Jake O’Regan was wheeling his 58-year-old father David through the centre of Bideford in North Devon when he walked him into the path of the moving bus on the town’s quay.

The bus was in a line of traffic which had just pulled away from a red light at a crossing and the driver was able to brake in time to prevent a serious impact.

CCTV on the bus showed O’Regan and his father leaving the pavement and the bus swerving slightly to the right and stopping suddenly as it hit the wheelchair and tipped David O’Regan onto the road, where passers-by ran to his aid.

His son was seen hanging around the area but then walked the short distance to Bideford Police Station and said: ‘I’ve just pushed my father under a bus. I need to be detained. Voices told me to do it’.

He later claimed that his father had mistreated him over the past three or four days and he wanted his father to feel as he felt.

He said his father had been niggling him throughout the trip into Bideford, telling him he was pushing him too slowly and then complaining he was going too fast.

O’Regan is a former mental patient who had asked to be returned to hospital shortly before he carried out the attack in February this year. He also told police he had been speaking to God and was ‘in hell’.

A consultant psychiatrist said he has been treated for paranoid schizophrenia in the past and his current diagnosis is of a psycho affected disorder with auditory hallucinations and behavioural disturbance.

O’Regan, aged 27, of Barton Tors, Bideford, and now a patient at Langdon Hospital, Dawlish, admitted attempting to cause grievous bodily harm with intent and was made subject of a hospital order with a restriction on his release.

It means he will remain in hospital until doctors and the Ministry of Justice agree that it is safe to move him into the community.

Judge Timothy Rose told him the restriction was necessary for the protection of the public.

Mr Joss Ticehurst, prosecuting, said O’Regan walked into the police station at noon on February 2 this year to tell officers that he had pushed his father under a bus.

Dr Anil Mohandas, consultant psychiatrist at Langdon Hospital, said O’Regan was being treated in the community after his last discharge in 2019 but was due to be recalled on the day of the incident because of problems with him not taking medication.

O’Regan, who appeared by video link from hospital, told the judge: ‘I didn’t know who I was or where I was.

‘My dad was threatening to ram things down my throat if I didn’t take my medication.

‘If you looked at the other CCTV camera you would see he was whingeing at me all the way around town, saying speed up or slow down when I was pushing him.’

Kingsteignton drink-driver is fined and banned

Disadvantaged pupils in Devon fall further behind peers during pandemic

27 June 2022
We use cookies on our website to give you the most relevant experience by remembering your preferences and repeat visits. By clicking “Accept All”, you consent to the use of ALL the cookies. However, you may visit "Cookie Settings" to provide a controlled consent.
Cookie SettingsAccept All
Manage consent