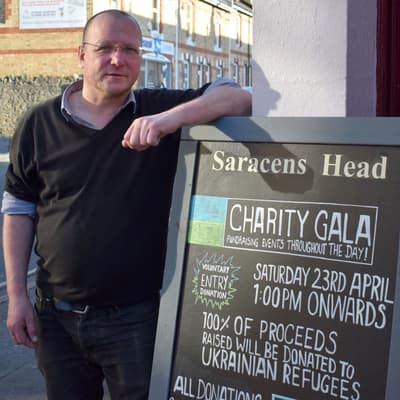 Andrei Slipchenko (pictured right), landlord of the Saracens Head in Fairfield Terrace, was so moved by the current suffering in the Ukraine caused by the Russian invasion he wanted to help.

Mr Slipchenko has a particularly close bond to the Ukraine as his late father Dmitro was born there.

And as Dmitro was a refugee from the Ukraine at the end of the Second World War, Mr Slipchenko knows better than most how difficult it is for people caught up in the current crisis.

In the six weeks before the gala last Saturday, Mr Slipchenko, staff Natalie Guilfoyle and Louisa Becker, customers and total strangers who heard about the event set about gathering lots for a charity auction and raffle pries.

Emma Pick, a South Devon musician with a large following, performed at the gala and her gigs attracted more potential bidders to the pub.

Around 30 lots went under the auctioneer’s hammer, expertly wielded by Newton Abbot businessman Will Smith, and around 50 prizes were up for grabs in the raffle.

Among the best-selling items were a two-day spa break that raised nearly £300, a meal out that was bid up to £424 and a 19th century painting of a balloon race that realised £150.

The auction raised exactly £2,000 and the combined proceeds of the raffle, other fund-raising events and a donation of £600 from the Complete estate agency firm added more than £2,300.

‘And there is still a bit more to come in so I would hope we get to around £4,500 by the time we finish counting,’ said Mr Slipchenko.

Mr Slipchenko said the longer the day went on the wackier the ways people found to raise a few extra pounds.

‘Someone won a chest waxing in the raffle and that snowballed into random customers asking to be waxed in the pub and paying for the privilege,’ said Mr Slipchenko.

‘Craig Maguire, one of our regulars, had all his hair taken off … including his eyebrows.

‘Pete Hooper, another of our customers, used to have a splendid bushy beard. Not any more!’

Mr Slipchenko said the generosity of customers had ‘staggered’ him and his staff.

‘I have never seen the pub so busy and at times I wondered where they had all come from?’ said Mr Slipchenko.

‘I was staggered that we raised so much money. It really was a fantastic effort by all concerned.

‘It was hard work to organise and harder work on the day to keep everything going, but worth it for the end result.

‘And I cannot thank Will Smith enough for his role in making the event such a success. A couple of my locals suggested asking him as they had seen him at work before. I am so glad they did as he was not only brilliant but very funny as well.’

All the money raised will be handed to the Disasters Emergency Committee, which is working with refugees and displaced people from the Ukraine.