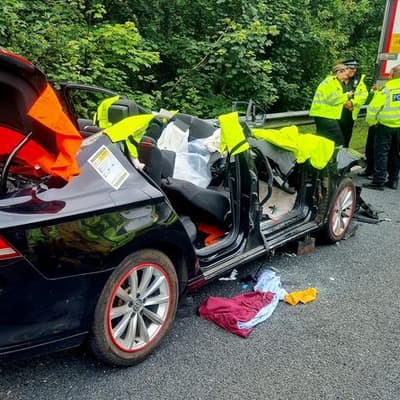 POLICE are appealing for witnesses to the ‘serious collision’ between a car and an articulated lorry on the A38 near Ivybridge yesterday afternoon, Tuesday.

Firefighters from Buckfastleigh and Ashburton with colleagues from Ivybridge and Middlemoor, were mobilised following the collision.

Police officers were called just before 1.15pm following the collision between a black VW Passat and a Volvo HGV on the westbound carriageway at Bittaford.

A police spokesperson said this morning, Wednesday: ‘The car driver, a man in his 50s from Plymouth, sustained injuries and was extracted from the vehicle by the fire service. He was taken to Derriford Hospital where he remains.

‘The driver of the HGV was uninjured.

‘The westbound carriageway was closed for around five hours for Roads Policing Team officers to examine the scene and for the vehicles to be recovered.

‘Police are investigating the cause of the collision and appealing for any witnesses who were in the area at the time to contact them.

30 August 2022
We use cookies on our website to give you the most relevant experience by remembering your preferences and repeat visits. By clicking “Accept All”, you consent to the use of ALL the cookies. However, you may visit "Cookie Settings" to provide a controlled consent.
Cookie SettingsAccept All
Manage consent