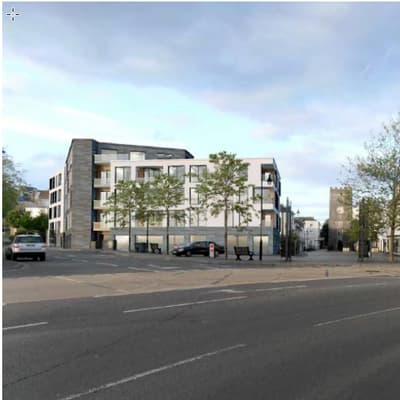 PLANS have gone in for 38 retirement flats and ground floor shop units on the overgrown land at 22 to 26 Wolborough Street on the edge of Newton Abbot town centre.

The site has been on the market for a number of years after previous plans to develop the site on the former Volvo dealership fell through.

The application states it is for ‘a part four, part five storey building to provide 38 residential units (Class C3) and associated facilities with retail accommodation at ground floor levels.’

The application has been made in the name of Newton Abbot Development Limited but the agent’s name is given as Mr Thomas Beard, of London. A previous similar planning application had been passed but had expired.

Nick Pointon, director of the owners of the land Newton Abbot Developments Ltd, this week confirmed that contracts had been exchanged and it was all dependent on the plans being passed again.

‘The planning permission we have put in is exactly the same as before.

‘So assuming that goes through and that it’s in a form that’s acceptable to our buyers then hopefully it will all go ahead.

‘If, however, they do not like the planning application then it is possible that we might have to put it back on the market.’

‘We’re hoping to get moving as soon as possible depending on how long it takes to get the planning permission sorted, hopefully no longer than three months so we could be looking at quarter three of this year, but I don’t like to count my chickens too early.’

‘Hopefully it will all go through and be a very useful amenity for Newton Abbot and not an eyesore any more attracting people who want to take drugs or drink there.’

A spokesperson for Newton Abbot Town Council said: ‘As the site already had permission for this exact same proposal, we hope the planning authority can fast track the application so that work can start as soon as possible to deal with the last vacant site in the historic town centre of Newton Abbot.’

Sally Henley, Newton Abbot’s town centre development manager, previously said: ‘Locals will be aware that this development site has been rather a blight on our otherwise beautiful Clock Tower Quarter for over a decade.

‘It is frustrating that despite there having been two developments with planning approval in that time, no building has materialised.’

For a time a man moved a caravan onto the site and declared he wanted to turn it into a community garden.

He has since been moved on.