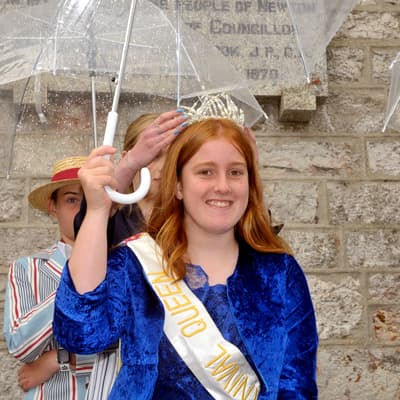 Kicking off at 12pm, the event will have all manner activities on offer: a bouncy castle, trade stalls, live music, food, refreshments and a wheelbarrow race.

Eight team members will race around the 230 metre course all the while avoiding water pistol fire and completing a couple of games – the winning team will be the one that completes the most laps in 60 minutes.

The carnival procession will depart Courtney Park at 6pm and head toward Highweek Way.

First prize was £40, second prize was four bottles of wine and third prize was £20 with each prize being presented by Mayor Cllr Carol Bunday.

The evening also featured an auction for a perfume selection, which was donated by Austins, and a prize draw with donations from business in the town.

The ceremony saw Miss Elysia East, who was surrounded by her attendants: Carla East, Marcus East, Katie Last and Daniel Last, take the reigns from previous incumbent Miss Emily Last who had been queen since 2019.

Application for new homes in Highweek

17 September 2021
We use cookies on our website to give you the most relevant experience by remembering your preferences and repeat visits. By clicking “Accept All”, you consent to the use of ALL the cookies. However, you may visit "Cookie Settings" to provide a controlled consent.
Cookie SettingsAccept All
Manage consent