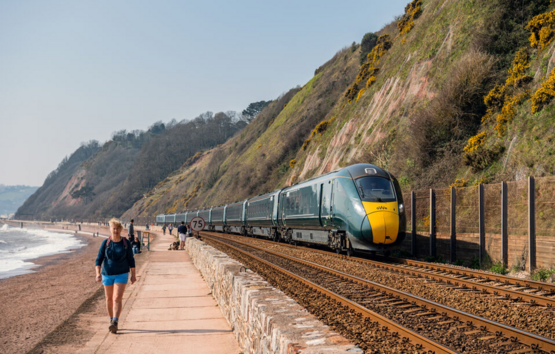 Network Rail is to install new fencing and rock nets at Dawlish, after the granting of £32 million by the Department for Transport.

Work will take place during 2023, as part of the latest stage of the South West Rail Resilience Programme (SWRRP) that is intended to protect the only rail connection between Cornwall and the rest of the country. The fencing will run from Marine Parade in Dawlish to a new rock fall shelter on the north side of Parsons Tunnel.

In addition to £21m in scheme development, £150m has now gone into improving the resilience of Brunel’s famous railway along the Dawlish Sea Wall.

The first phase, completed in 2020, featured the construction of a new wall 400 metres west of Dawlish station, along Marine Drive between Kennaway Tunnel and the Colonnades.

The second phase, now being carried out, will entail a new wall to the London side of Dawlish station, as far as the old coastguard house (415 metres). Together, the first two stages will have cost £80m.

A further £38m phase of work started late last year. This will deliver a new rock shelter and other work between the five tunnels immediately to the west of Dawlish.

Options for the final stage, which is expected to result in a completely new formation over a mile of line between Holcombe and Teignmouth, are still being worked on. It was on this section that storms severed the main line for eight weeks during 2014.

your donations can save lives

21 August 2022
We use cookies on our website to give you the most relevant experience by remembering your preferences and repeat visits. By clicking “Accept All”, you consent to the use of ALL the cookies. However, you may visit "Cookie Settings" to provide a controlled consent.
Cookie SettingsAccept All
Manage consent