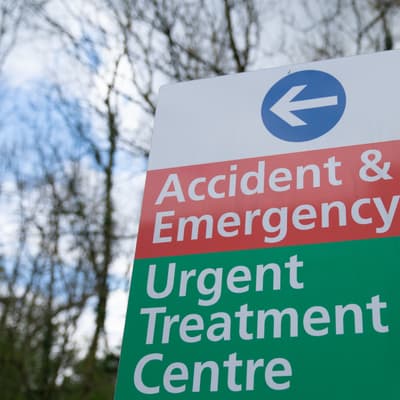 Nearly two-thirds of patients needing the most serious A&E care at the Torbay and South Devon Trust waited longer than four hours to be seen last month, figures show.

The Nuffield Trust health think tank said delays to care are “uncomfortable at best and dangerous at worst” and cautioned that the coronavirus pandemic is not solely to blame for current pressures on A&E services across the country.

NHS guidance states that 95% of patients attending accident and emergency departments should be admitted, transferred or discharged within four hours.

But Torbay and South Devon NHS Foundation Trust fell well behind that target in May, when just 38% of the 5,911 attendances at type 1 A&E departments were seen within four hours, according to figures from NHS Digital.

Type 1 departments are those which provide major emergency services – with full resuscitation equipment and 24-hour consultant-led care – and account for the majority of attendances nationally.

It means 62% of patients needing the most urgent care at the Torbay and South Devon Trust waited too long to be seen last month, in line with 62% in April, and up from 31% in May 2021.

Including the 2,884 attendances at other accident and emergency departments, such as minor A&Es and those with single specialties, 58% of A&E patients were seen by the trust within the target time in May.

The King’s Fund think tank warned patients are waiting longer in A&E departments for a “wide range” of reasons, including rising A&E attendances and emergency admissions to hospital, fewer hospital beds being available and staffing strains.

“The four-hour A&E waiting time standard is one of the most high-profile indicators of how the NHS is performing,” it said in a recent report.

“The sustained declines in performance against this waiting time standard place a significant toll on patients and staff alike and are a clear indication of the pressures the wider health and care system is under.”

Performance was worse in type 1 departments, where just 60% of patients were seen on time in May, down significantly from 76% during the same month last year, and 79% before the coronavirus pandemic.

Nuffield Trust fellow Jessica Morris said: “Performance against the four-hour target has deteriorated rapidly during the pandemic but looking back further it is clear that waiting times for patients in major emergency departments have been growing for the last decade.

“A decade ago, one in 20 people found themselves waiting longer than four hours to be either admitted, transferred, or discharged from major A&E but the most recent figures show this has jumped to four in 10 people. These waits are uncomfortable for patients at best and dangerous at worst.”

She added that a lack of resources and staffing pressures are fuelling waiting times across the entire health service.

15 June 2022
We use cookies on our website to give you the most relevant experience by remembering your preferences and repeat visits. By clicking “Accept All”, you consent to the use of ALL the cookies. However, you may visit "Cookie Settings" to provide a controlled consent.
Cookie SettingsAccept All
Manage consent