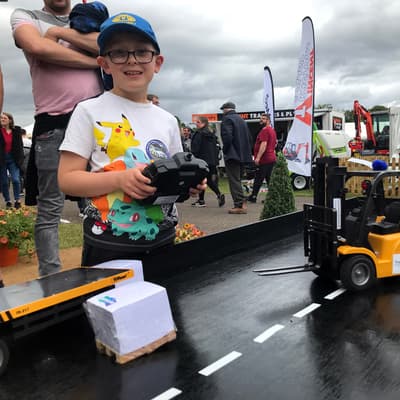 YOUNG fans were flocking to the Westexe Forklifts stand at the Devon County Show today – with the draw being rather smaller remote control operated mini forklifts.

Staff on the stand, which won the gold for the best trade stand in the agricultural machinery, were convinced the accolade had a lot to do with the novelty.

Kids were queuing up to take their turn at the controls of the remote controlled toys, which in fact the dealership do not sell themselves.

‘I have had a lot of people asking me where you buy them,’ said Nick Palmer from Westexe. ‘We’ve been flat out since the moment we opened. We keep running out of batteries!’

Among the youngsters enjoying themselves were George and Alfie Feerik, seven and two, from Honiton, and six-year-old Charlie Nicholas from Liskeard.

Bovey Tracey traders must adapt in wake of new supermarket

Glut of ‘greens’ will help Teignbridge families in need

17 October 2022
We use cookies on our website to give you the most relevant experience by remembering your preferences and repeat visits. By clicking “Accept All”, you consent to the use of ALL the cookies. However, you may visit "Cookie Settings" to provide a controlled consent.
Cookie SettingsAccept All
Manage consent