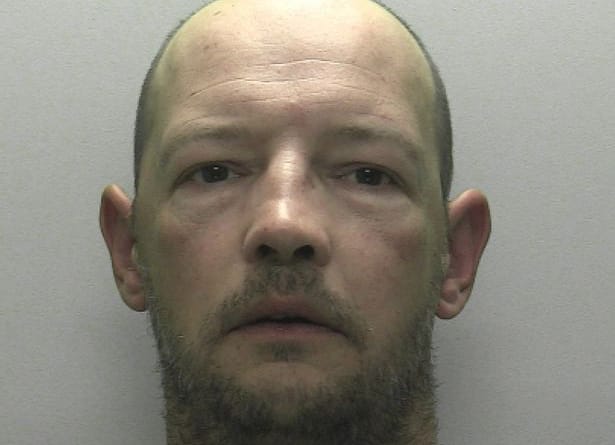 Three members of a motorcycle gang have been jailed for the ‘senseless’ killing of a rival biker who was chased through the streets before being deliberately mown down. Victim David Crawford was targeted because he belonged to the Cornish-based Red Chiefs and had worn their distinctive logo while riding through Plymouth, where the Bandidos group were based.

They were armed with a baseball bat, extendable baton and hammer and were driving close to the Transit when it crashed into Mr Crawford’s Kawasaki on the Weston Mill slipway on the night of May 12 last year.

Pawley and Brading slowed down in front of Mr Crawford and Parry then hit him from behind before driving a kilometre with his body trapped under the van, causing fatal multiple injuries. The family of 59-year-old Mr Crawford paid tribute to him in a series of moving victim impact statements which were read to Judge Mr Justice Garnham before he passed sentence at Exeter Crown Court.

Benjamin Parry, who has been jailed for 12 years (Devon and Cornwall Police )

Mr Crawford was not only a biker but a keen rugby fan who had played until he was in his 40s and was a well known figure in Ivybridge, where he was known affectionately as Mad Dog, a nickname carried over from his playing days.

His daughter Sarah, who now lives in Brisbane, Australia, wrote: “When I heard my dad had died, the pain was immediate. My heart felt as if it had been ripped out of my chest. I am devastated beyond words. “He was a massive character. He was not pushed around by anyone and lived by his own rules but the people who knew him knew he had a softer side, like a teddy bear. He would say he was all soft and gooey inside.”

His widow Ann-Marie wrote: “When I was told he had been killed, my whole world changed. At any time they could have turned around and gone home. Parry’s apology felt like another twist of the knife.;

Stepdaughter Janice wrote: “The pain and heartache these men have caused me has scarred me for life.”

Benjamin Parry, aged 42, and Chad Brading, aged 37, both of Wrights Close, Plymouth; and Thomas Pawley, aged 33, of Heather Walk, Ivybridge, all denied murder and were found guilty of manslaughter by a jury at Plymouth Crown Court last year.

Parry was jailed for 12 years, and Brading and Pawley for four years each by Mr Justice Garnham, who also banned Parry from driving.

He told them that the dispute between the motorcycle groups was ‘infantile’ and said Parry actions had been a ‘moment of indefensible stupidity’. He concluded that the original intention had been to give Mr Crawford ‘a slap’ rather than to cause serious injury.

He said: “Parry did not stop even though he knew he had struck Mr Crawford. He carried on onto the A 38 until the next slip road, a distance of almost 1,000 metre. Mr Crawford stayed beneath the vehicle being grated along the tarmac throughout that ghastly journey.

“Mr Crawford was entirely innocent in all of this. He had just been out for a ride on his bike with friends from a motorcycle club. Neither he nor his fellow bikers had done anything wrong. “You three had no basis to decide who rode their bikes in Devon or what they wore when they did so. He was a man of 59 whose wife, children and grandchildren have been left devastated by his senseless killing.

Mr Paul Cavin, KC, said Parry’s decision to knock Mr Crawford off his machine carried with it a high risk of death and was an unlawful act which put it in the highest category for manslaughter. Mr Sean Brunton, KC, for Parry, said he is truly remorseful and never intended the terrible outcome when he made the ‘idiotic and aberrant’ decision to knock Mr Crawford off his bike.

Mr Ignatius Hughes, KC, for Pawley and Mr Joseph Stone, KC, for Brading, said they are both ex-servicemen who had been leading productive lives before this incident.

They said their clients could not have anticipated that Parry would run down and kill Mr Crawford in the way that he did.

15 November 2022
We use cookies on our website to give you the most relevant experience by remembering your preferences and repeat visits. By clicking “Accept All”, you consent to the use of ALL the cookies. However, you may visit "Cookie Settings" to provide a controlled consent.
Cookie SettingsAccept All
Manage consent