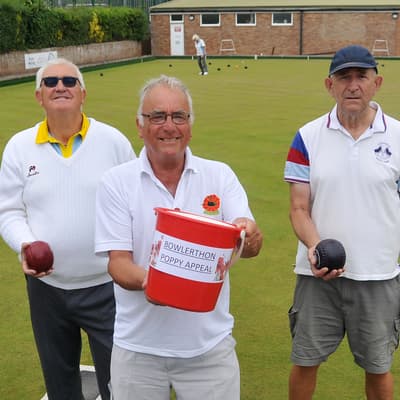 DAWLISH has its own Master of the Bowls.

Richard Hayward, a member of the Marina Bowls Club, has completed a seven-hour marathon in aid of a servicemen’s charity.

And to cap it all he did it on his 71st birthday.

Rather than put his feet up for the day he was on the bowling green for seven hours raising money for the RBL Poppy Appeal.

Richard, a retired RN Master at Arms, said: ‘The Bowlerthon went reasonably well. The opening hour started with a pairs match, and the second hour was also a pairs match.

‘My playing partner was Steph Cheshire against Kelvin Carter and Ian McDonald, third was with Fred Baker, the fourth hour was against Chris Swain.

‘After my break I had to play in a mixed pairs club competition partnering Mo Crugten against Cherry Chapman and George Monk.

‘The match consisted of playing 21 ends which took just under two and half hours.’

The club’s Peter Hayes said: ‘The Poppy Appeal on behalf of the British Legion is very close to Richard’s heart, to the extent that he virtually bowled continuously for seven hours and impressively raised funds through members’ donations in excess of £75 with a further £160 pledged from two sponsors.

‘During the day he bowled no fewer than 68 ends – 272 woods – covering a distance of almost two miles and comfortably managing in excess of 10,000 steps.

‘This clearly demonstrates Richard’s commitment to this very worthy cause. It has been a real privilege to work alongside him during the past few weeks.

The marathon effort has raided more than £220 and they’re still counting. All the money, when it’s tallied, will be added to the donations  Richard has raised through his Dawlish Poppy Appeal badges. Last year he raised £2,300 and so far he’s sold the first 350 of this year’s collector’s badges. He’s just ordered another 500. ‘When they’re gone they’re gone!’ he said.

Richard only took up the sport when he retired in 2014 and had intended to complete an eight-hour stint, but the weather was against him.

‘I was preparing to play the last hour when it started to rain, so not knowing how long this would carry on for I decided to call it a day. It wasn’t worth getting wet!’

Litter pickers in action in Teignmouth