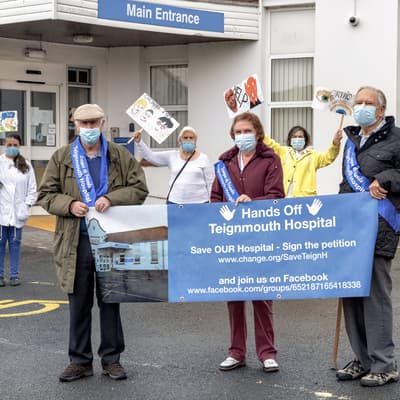 ONE of the leading lights in the fight to save Teignmouth Hospital this week said the campaigners had been ‘let down by all levels of Government’.

This comes in the week Teignbridge councillors approved the sale of land in Teignmouth town centre to the NHS to build a new health and wellbeing centre. Teignbridge Council’s full council voted in favour of selling the site at Brunswick Street following negotiations between council officers and the NHS.

‘Is it any wonder that we feel let down by all levels of Government!’ says Geralyn Arthurs, of Teignmouth’s Hands Off Our Hospital campaign.

Geralyn says: ‘It has long been considered by the majority of the public that if you want a controversial proposal to be passed it requires being debated close to one of the large national holidays when minds are focused on family and friends.

‘This was not the plot that adjoins George Street and is boarded up with billboards informing the public that our health trust wants to build a Health and Wellbeing Centre in this congested part of the centre of town, but the plot that the Premier Inn wanted for an hotel and Beefeater Restaurant.

‘No consultation with the public over this change of use! This is undemocratic and should not have happened.

‘Undoubtedly TDC is struggling, like all councils, with reduced revenue from central government but that makes it even more imperative to ensure that local residents are fully involved with the future planning and infrastructure of their town.

‘The public was already aware that the previous plot, Site 2, was being offered to the TSDNHSFT at a considerably reduced rate, hopefully this plot, Site 1, a superior commercial site has not been ridiculously undervalued and sold for a fraction of its real worth. If it transpires that this is the case then questions will have to raised as to why this happened.

‘Cllr Chris Clarance suggested an eminently sensible amendment to the proposal for selling this site to the NHS. Technically he requested a deferral so that the councillors, and indeed the public, would be able to ascertain what the NHS would propose as a way forward for a Health and Wellbeing Centre if this land was not available.

‘A reasonable suggestion seeing this site was originally earmarked for an hotel and was not up for offer when the NHS wanted to construct its new-build.

‘Hands Off Teignmouth Hospital would have appreciated this amendment being approved as it would have given us campaigners time to see whether the Secretary of State for Health and Social Care would be prepared to refer the proposed closure of Teignmouth Community Hospital back to the Independent Reconfiguration Panel (IRP) to advise him on the medical grounds impacting on the local population.

‘All our councillors know that without this happening we are looking at a judicial review to overturn what we consider to be a medical disaster and an injustice.

‘Is it any wonder that we feel let down by all levels of Government!

‘Firstly, our County Councillors on March 25, 2021, referred the proposed closure of Teignmouth Hospital to the Secretary of State on the grounds of whether they had been adequately consulted. Surely if they were going to pursue this line it should have been whether the public consultation was transparent or predetermined? Why on earth they did not go with their Spotlight Review findings of December 14, 2020, when they stated that the proposal to close Teignmouth Hospital is not in the best medical interests of local people.

‘This is what really matters and even our MP, Anne Marie Morris, has stated that the decision is not in our best interests.

‘Although Devon County Council Health and Adult Care Scrutiny Committee know that the IRP is willing to look at this case again the Chair and majority of members are not prepared to send it back to the Rt Hon Sajid Javid MP. Whether public opinion will carry the same weight as the statutory body we will have to wait and see.

‘We have done everything we can to try and make the public aware of the reality of the situation. Retired doctors, nurses and other health professionals have spoken out in support of retaining Teignmouth Hospital.

‘This country is well on the way to the American system of healthcare with privatisation being implemented through the back door, but the majority of the public is unaware of this fact.

‘To the District Councillors who voted for Cllr Clarance’s amendment thank you for understanding that putting a Health and Wellbeing Centre in Brunswick Street will create severe problems for the residents and business that operate within this area.

‘It may also have given us the opportunity to avoid a judicial review, which appears to be our only form of redress unless Teignmouth Town Councillors and Teignbridge District Councillors lobby Devon County Councillors to resend the proposal back to the Secretary of State for the IRP to analyse the medical evidence.’