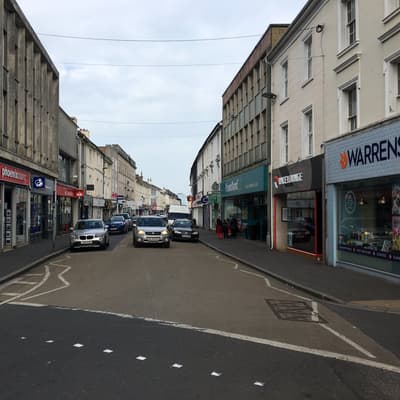 A PUBLIC consultation on the future of Newton Abbot town centre finishes on Friday June 24.

Residents, business operators, indeed anyone who shops in Newton Abbot, have been urged to speak up about proposed changes to parking and pedestrian access in Queen Street before this week’s June 24 deadline.

The call has come from Newton Abbot Town Council (NATC) whose members have also urged both Teignbridge (TDC) and Devon County Council to work more closely with them before announcing major infrastructure projects.

More than 700 people – believed to be a record number for the county council – have so far taken part in the public consultation on proposals to give greater priority to pedestrians and cyclists.

Supporters say it will make the destination safer and more attractive to visitors while opponents fear the loss of more than half the existing car parking spaces will destroy trade.

Cllr Lesley Sheffield, chairman of NATC’s Community and Heritage Committee, said: ‘It’s important people have their say on this scheme which has come about as a result of Teignbridge securing a £9.2 million share of the Government’s Future High Street Fund.

‘Naturally, we applaud TDC’s efforts to win investment for the town but are hearing from some people that they don’t support the loss of on-street parking.

‘When Devon consulted on a blanket 20mph limit for Newton Abbot more than 300 people submitted responses with the majority against, hence it was scrapped.

‘Now more than 700 have taken part in the Queen Street consultation, we believe that’s the greatest response ever. But it’s crucial that everyone has their say, whether for or against. This must be decided by the community.’

Cllr Sheffield said events such as the Annual Town Meeting in May had allowed residents to voice their thoughts about the town’s future with concerns expressed that schemes were being imposed on Newton Abbot.

She cited plans to revamp the indoor market and Alexandra Theatre, also made possible by the Future High Street Fund money, as examples.

‘We would dearly love to work more closely with Teignbridge and Devon before proposals are put to the public,’ she said.

‘Town councillors have a good understanding of what people want and could help finesse projects in advance of public consultation.

‘There is already a vision for our town as expressed in the 25-year Newton Abbot and District Community Plan, which we’re currently updating.

‘If TDC and Devon adopted this a blueprint it would be a win-win situation and we’ve written to both authorities expressing this sentiment.

‘We hope they take up the opportunity.’