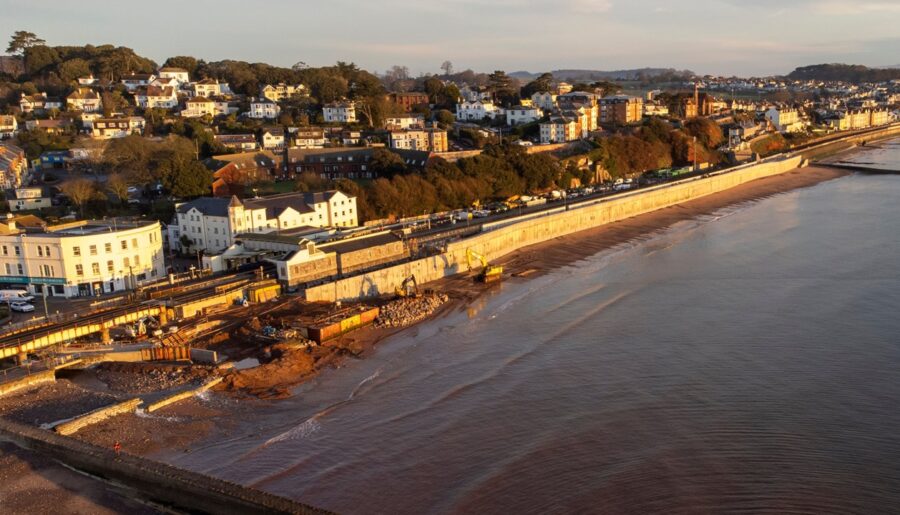 
It will make this section of railway more resilient to severe weather – and mean a safer railway for you and the people who live nearby.

We’ve faced many challenges building this bigger, better defence, but how have we overcome them?

An important stretch of railway:

The new sea wall is part of our South West Resilience Programme, which we began after the collapse of the railway in Dawlish in 2014.

An extreme storm that February led to an eight-week closure of the line in 2014, leaving the South West cut off by rail from the rest of England.

Our new sea wall will better protect the railway and the town of Dawlish from similar weather events. Our designs and meticulous construction methods will also ensure that the wall lasts for more than 100 years.

One of the biggest challenges we’ve faced is the tide. Our teams are out on site 24/7 working between the sea and the railway.

The tide comes in twice a day and leaves us with only four to six working hours between each tidal change.

We need much larger machinery and equipment to build a bigger sea wall and need to get it to site.

Getting our machines to hasn’t been easy, with the sea in front of us and the railway and busy town of Dawlish right behind.

We used the WaveWalker – a floating barge that can carry all our heavy machinery and allow us to carry on building during high tide.

It meant we could install the heavy steel and concrete foundations 24 hours a day to ensure we delivered section two of the sea wall on time. Our teams also used a landing craft to bring in cranes and excavators to install pre-cast concrete sections of the wall.

Not Just a sea wall:

We’ve carefully considered the local community and have worked hard to include a new promenade and walkway with access to the beach.