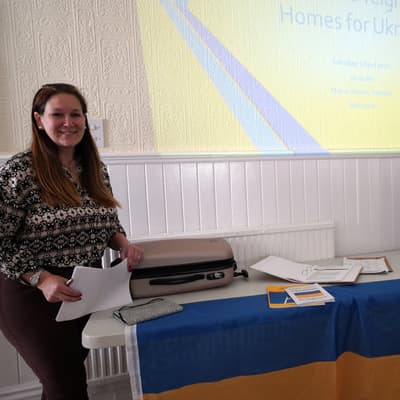 EFFORTS to provide homes and help to Ukrainian refugees coming to Teignmouth and Dawlish are gathering momentum.

Despite lengthy waits on visas, the group behind co-ordinating the campaign to provide homes to those fleeing the war-torn country are determined to press ahead.

Jody Merelle, one of the organisers, said: ‘There is a large number of people who want to make this work and although it is challenging at the moment, we are not going to give up.’

Just two weeks after the group Dawlish and Teignmouth Homes for Ukraine was formed, more than 60 people met at the Manor House in Dawlish to offer help and support.

Jody said: ‘It was really constructive and it gave us the opportunity to get to know each other.

‘It’s early stages but we are putting together a network of people including hosts and those able to offer and support to our Ukrainian guests.’

Among those involved are ex-teachers, foster carers, people working with children with special needs, doctors and nurses and people with qualifications teaching English as a foreign language.

Jody added: ‘We really want to stress this is not about putting pressure on people to become hosts.

‘It is a massive undertaking giving up your home and this is long term, not a week’s holiday.

‘People have been apologising that they can’t offer accommodation but people shouldn’t be, it’s a big thing.’

The meeting was a chance for people to offer help in other ways.

Offers have been made to arrange days out, help with form filling, CVs, school registration and a recruitment expert is to help with finding job vacancies.

Others have offered to host short term in case of any emergencies as well as dog sitting and baby sitting.

Several people have already been matched with refugees and are waiting for visas to come through.

Jody, who has recently returned from a trip to Krakow in Poland, explained that the UK visa system does not have a good reputation and volunteers helping Ukrainian refugees are not suggesting they try to come to the UK as other countries are processing paperwork far more quickly.

One refugee who applied to go to Canada had all the paperwork through within 48 hours.

From Krakow, 50 families were flown direct to Norway without any visas.

‘We need to be truthful and realistic as it is not easy. But we are putting as much pressure as we can to speed this up. There is a lot of lobbying to make it a better system.’

Among the offers of help are from several Ukrainians living locally who are helping with language and translations.

One person who attended the meeting said: ‘It was very emotional at times. ‘The Ukrainians were touched by a message saying ‘Dawlish is with you’ and they also loved a simple bubble-blowing toy which reminded them that there was a world outside the war.’

Rosie Dawson and daughter Kitty, 9, have been about the town with posters in hand looking for businesses to display them in their shop front window.

So far the mother and daughter team have handed out 35 of the 50 posters initially printed.

The posters, which read ‘People of Ukraine, welcome to Dawlish’ in Ukrainian, were printed out by Lady’s Mile Holiday Park and have been displayed by some Dawlish businesses already: John’s cafe, Park Road Pets, Memories Florist are among the businesses now displaying the poster.

The purpose of the posters is to make Ukrainians arriving in Dawlish in the coming weeks and months feel welcome and Kitty, who attends Gatehouse Primary, has been busy with mum Rosie in their effort to help those displaced by the on-going conflict who may soon be arriving from Ukraine to Dawlish.

Rosie said: ‘Kitty can be the most confident person at times but it can be daunting for her, everyone has given her all the time she needs to speak and get her words out which is really kind.

‘She is very passionate about people being welcomed and not feeling sad.’