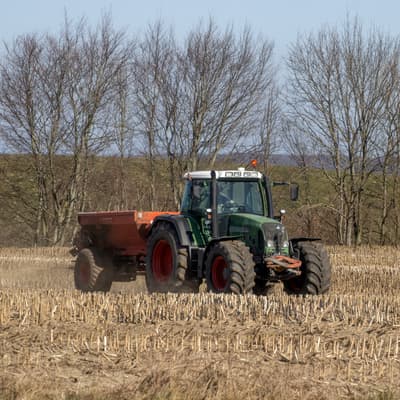 NFU Mutual is urging farmers to turn their farmyards into fortresses to protect diesel and fertiliser from thieves, amid high prices.

The leading rural insurer is concerned that a combination of high prices and shortages could lead to a surge in farmers’ red diesel tanks and fertiliser stores becoming targets for theft.

Despite reductions in fuel duty following the Chancellor’s Spring Statement white diesel is still costing over £1.75 a litre at many service stations and farmers are chasing supplies of red diesel to keep their tractors working the fields. Although it is subject to lower tax, red diesel is almost double the cost it was a year ago.

Fertiliser prices have increased up to four-fold in the last year and supplies have dried up as high gas prices mean it is not economic for manufacturers to keep production going.

While some farmers are unable to get hold of fertiliser and others are refusing to order stocks at current prices, others who bought early have increasingly valuable stocks in their farm buildings.

Rebecca Davidson Rural Affairs Specialist at NFU Mutual said: ‘Together the price rises and shortages are threatening future food supplies – but making stored fuel and fertiliser a major temptation for thieves at the same time. It’s making future planning a nightmare for farmers.

‘In the past, fertiliser thefts have been rare and farmers haven’t needed to put security in place to protect stocks. However, the huge swing in prices makes it possible that thieves will be on the lookout for stored fertiliser and may even try to use farms’ own machinery to load it up to lorries.

‘Every farm is different, and needs security measures appropriate to its location, layout and operation – but with normal trading hugely disrupted, everyone needs to up their game to reduce the risk of losing valuable supplies to criminals.’

In recent weeks, some farmers have started to plan increased on-farm red diesel storage tanks because of fears of shortages and even higher prices through harvest.

She added: ‘Over the last decade, many farmers have reduced the amount of fuel they store on farm because of the theft risk. If it’s now good planning to keep more diesel on farm, care needs to be taken to place the tanks out of public view and put security measures in place.

‘As well as the loss of expensive fuel, thieves often damage tanks leaving fuel running into the ground where it can cause horrendous pollution.

‘As prices rise, it’s also important to keep in regular contact with farm insurers to make sure there is adequate cover in place for the fuel, fertiliser and stored crops on the farm.’