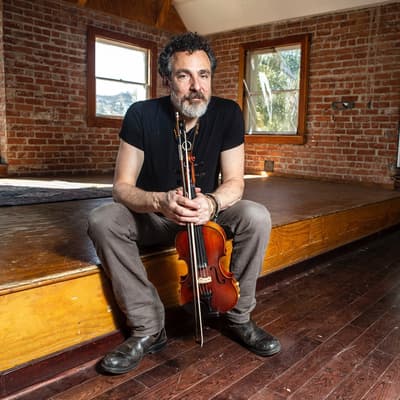 NOT all music venues are the same and one of the joys of being a musician on tour is the variety of places that you find yourself booked at.

And variety, as we all know, is the spice of life.

But whilst for most musicians this might mean a basement blues club one night, a pub garden the next afternoon and the private party the following day, few get to play in a 600-year-old castle.

And Chris Murphy is one of the lucky few that does.

The American violinist will be playing at Powderham Castle this Sunday (June 19) as part of a month-long UK tour taking in intimate gigs and large festivals, lively pub gigs seated art centres support slots and everything in between.

For 25 years, and with no sign of slowing,  Murphy has made a living by writing, performing and recording original music.

For him the path forward is charted by looking backward, to the troubadours and minstrels of ages past.

Forget the exaggerated reports of the music industry’s demise. It’s only the record industry, a relative blip in the history of putting tones in sequence, that’s suffering. Music, and the opportunity to make a life’s work out of it, well, that’s not going anywhere.

‘In another era,’ said Chris, ‘I would have played square dances, and loved it’

‘I would have been a court musician in Versailles in the 17th Century, or a violinist in a circus orchestra.’

For Chris, inspiration spans eras and aesthetics, but the fundamentals are the same.

Born into an Irish-Italian family near New York City, Murphy was surrounded by the disparate and eclectic sounds of his neighbours’ traditional music.

‘I heard and was influenced by everything – from Italian-mandolin music, to bluegrass and folk, to Latin music and  rock ’n’ roll,” he continued.

‘My real hero was David Lindley. Hearing him play fiddle and lap steel with Jackson Browne — that kind of esoteric, enigmatic soloing over songs is originally what I loved.’

He learned about Turkish and Indian music at Simon’s Rock of Bard College and then studied composition at Boston’s New England Conservatory of Music.

A longtime instrumental dabbler, Murphy has mostly taught himself how to play percussion, guitar and mandolin, even some Eastern instruments, but he found his proper match aged 22, when he picked up the violin.

‘It’s the one instrument you’ll find anywhere you go,’ he said.

‘And it has a wonderful, charming kind of minstrel quality. I love all the myths surrounding it.’

Eventually, Murphy did as so many American adventure seekers had done before him: He sought his fortune in the West.

Now based in Los Angeles, Murphy earns his living by teaching  guitar, mandolin and violin as well as   working on music for films, and, mostly, by performing his work for audiences.

After turning in a rip-roaring set at Powderham  last year, he returns promising  a show that you won’t want to miss.

He prides himself on being a flexible musician, one able to deliver spirited, punk-infused Celtic folk as easily as he does ambient cinematic soundscapes, and as at home carrying the show as a solo player as he is leading a band.

Expect fabulous blends of folk and bluegrass music, and expect a glorious show of crowd-pleasing tunes from a charismatic and talented player.

Expect the unexpected. But more than that, expect to be thoroughly entertained.

Tickets for the 8pm gig on Sunday are priced at £20 and can be booked through the website www.powderham.co.uk.