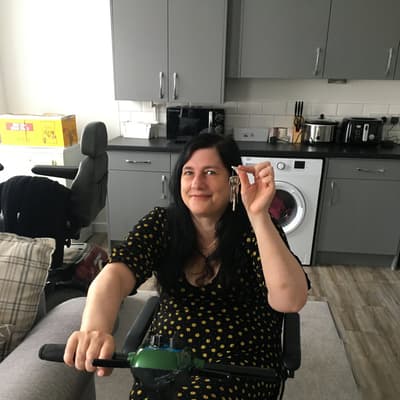 ‘IT’S fantastic’ was the verdict of new tenant Davina Taylor as she took the keys to her new flat in Newton Abbot.

The keys to the doors of five new council built flats at Well House, Carlisle Street, were handed over to local people this week.

One of them was Davina, who was clearly thrilled not only with the high quality finish of her new ground floor flat but the accessibility.

After a few days in her new home she said: ‘This is fantastic, wonderful. I can move around freely and don’t have the access problems I had where I was living before.’

Not only was it more accessible for Davina’s wheelchair but she was very impressed with the high quality finish of the flat and its kitchen.

‘It’s so lovely and airy and I fell really at home and comfortable here,’ she added.

The former brownfield site at Well House is now occupied by five one and two-bedroom flats built to a very energy efficient standard.

The flats have air source heat pumps, under floor heating and an array of photovoltaic solar panels on the roof to benefit from free energy from the sun.

The two flats on the ground floor are fully wheelchair accessible and benefit from their own parking spaces with electric car charging points ensuring that they are future proofed for generations to come.

On the first and second floors are three further flats (two, two bedroom and a one -bedroom) also built to a very high specification.

Teignbridge’s officers were quick to praise the eco credentials of the flats.

Peter Briscoe, the project manager, stressed the homes had been built to a high eco standard and would be very economical to run for the residents.

Graham Davey, housing officer, said he was delighted to see the homes being occupied and that in spite of the cost of building to the high specifications the council wanted, the rent had been kept to around £100 a week.

He said the importance of the council providing these homes could not be stressed enough.

Tammy Hayes, housing solutions lead, said the new flats would no doubt keep people from becoming rough sleepers as they could offer such high level of accommodation in an emergency or when someone became homeless.

Cllr Martin Wrigley, Teignbridge Executive Member for Communities, Housing and IT, said: ‘My vision would be to have five homes like these in every village across Teignbridge so local people can live in the area where they grew up.’

Since these were the second set of council homes Teignbridge had supplied, the first two were in Drakes Road, he added: ‘Our aspiration is to have up to 100 homes in the pipeline,’ he added.

‘These are magnificent flats delivered to a high specification to meet the Climate Change Emergency declared by Teignbridge.’

Disadvantaged pupils in Devon fall further behind peers during pandemic

Warning as drought status is declared