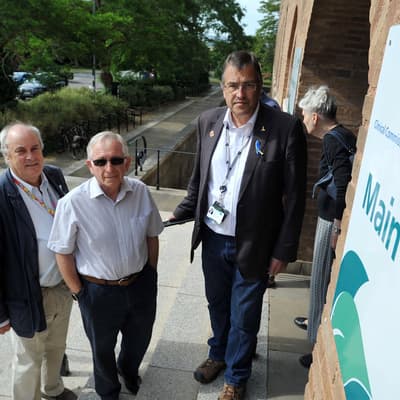 HOPES of a last ditch effort for a reprieve for Teignmouth Hospital were dashed after an effort at a further referral back to the Government was quashed.

Devon County Council’s health and adult care scrutiny committee voted against a final bid to reconsider a decision to close the town’s hospital.

The first NHS hospital built in the country after the formation of the NHS, the site in Teignmouth has been the subject of consultation over its future for several years.

In March, it was announced an Independent Review Panel backed the decision to close the hospital.

Since then, campaign groups fighting to save the historic hospital have continued to argue against its closure.

The county council committee’s final vote seems to have signalled the end of the line.

At the meeting, Teignmouth councillor David Cox argued ‘sentiment aside’, there should be a place for the hospital site.

He claimed recent long ambulance waiting times, said to be among the worst in the country, lack of care beds and nursing homes and pressures due to COVID suggested the previous decision should be reconsidered.

He told the committee: ‘It’s not one size fits all.

‘I don’t disagree with the CCG but there is nowhere to discharge people who can’t go home.

‘I don’t want Hattie Jacques to be the matron but we want to plan an appropriate new model.

‘Not everyone is able to go from an acute bed back home so we need beds.

‘Teignmouth Hospital is the answer.’

He said circumstances had changed since the decision was made and a response was needed to be made to the new conditions.

Health bosses from the Clinical Commissioning Group said they ‘heard the frustration about individual experiences’ but said there was a ‘better way’ of treating patients.

One CCG member said the new model offered ‘the right care, in the right place for the right person’ and that ‘hospital is not the safest place to be’.

It was said four times as many patients could be treated at home as in hospital with the same staffing and resources.

It was also pointed out that there were benefits from having all services under one roof at Brunswick Street which would attract more staff and be an ‘attractive’ building for healthcare professionals.

However, the CCG admitted the system was not currently working at the moment but it was trying to support the need for people not to go to hospital in the first place.

But representatives argued they could see ‘no real change’ in the situation and said they wanted to ‘get on with this’.

There was concern, raised by Dawlish member Cllr Martin Wrigley, that not all Teignmouth GP surgeries had agreed to move into the new town centre premises.

A CCG spokesman said, while the largest surgery was joining, the other practice ‘for their own reasons’ had chosen not to be involved.

It was described as a ‘great shame and a missed opportunity’.

Committee chairman Cllr Sara Randall-Johnson told the committee at the beginning of the meeting: ‘It is very, very rare there would be an option to overturn this decision.

‘That’s not to say we are coming from a biased perspective.

‘But we need to manage expectations although many have been disappointed.’

Questions were raised about increased ambulance waiting times, said to be the longest in the country, and a lack of care workers.

Health bosses confirmed the current Teignmouth Hospital site would not be sold but plans for its future were under consideration and stakeholders will be involved in determining how the building can be used.

Planning permission for the new health and well being centre in Brunswick Street in the town centre has been approved by Teignbridge District Council.

Retired doctor and surgeon David Halpin, from Haytor, spoke at the meeting saying he believed the NHS was being used as being a ‘political football’ and said standards of care had ‘fallen’.

He told the committee it was ‘unethical and cruel’ for doctors not to see patients ‘face to face’ and that he felt standards of care had fallen.

Cllr Cox’s proposal to ask the Secretary of State Sajid Javid to reconsider the closure of Teignmouth Hospital was based not on ‘reasons of sentiment’.

He said: ‘I don’t want Teignmouth Hospital to be a museum exhibit or a cherished relic.’

But he said the hospital could remain open, whether funded by the NHS or not, as it had a real part to play in the way healthcare could be provided.