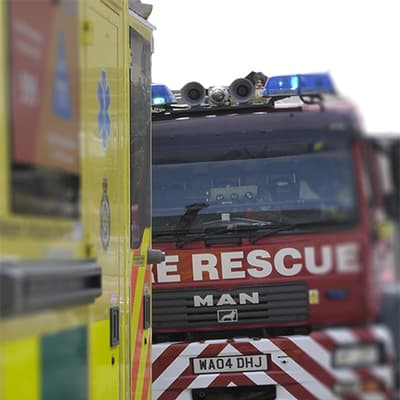 FIRE, police and ambulance crews coordinated their expertise to rescue a man who had fallen from a roof in the centre of Newton Abbot in the early hours of this morning (Sunday, June 26).

Rescue services responded to the incident in Market Street just after midnight following reports that a man had fallen six meters from a flat roof into a culvert.

‘Crews from Newton Abbot and Torquay, together with our specialist rescue team from Bridgwater, and specialist officers, were mobilised following a call from the police at 12.10am,’ said a spokesman for Devon and Somerset Fire and Rescue Service.

‘Because of the casualty’s position and injuries a careful and coordinated approach was needed.

‘Using safe systems of work, ladders, rescue lines, trauma equipment and a stretcher we were able to assist and recover the man in the near two-hour rescue operation.’

Once extracated the casualty was thoroughly assessed again and transferred to hospital with the incident being completed at 02.12am.

Fewer than 20 people convicted of rape in Devon and Cornwall last year – as more than 1,500 offences recorded

2 December 2022
We use cookies on our website to give you the most relevant experience by remembering your preferences and repeat visits. By clicking “Accept All”, you consent to the use of ALL the cookies. However, you may visit "Cookie Settings" to provide a controlled consent.
Cookie SettingsAccept All
Manage consent