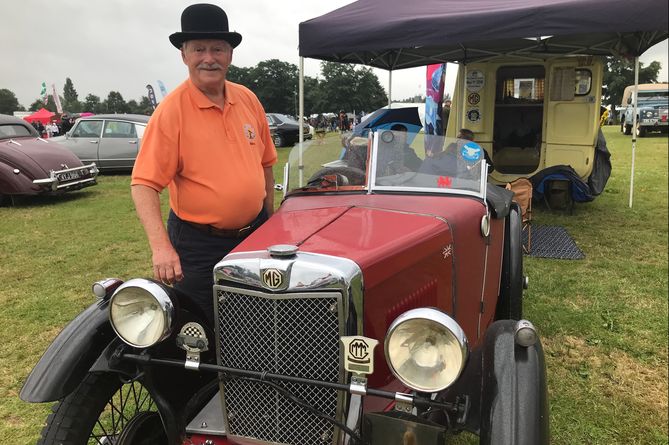 A DUTCH couple made a pilgrimage of hundreds of miles to the Devon County Show – at the wheel of their classic car.

Cees and Reny Berkvens travelled from Holland for the show at Westpoint near Exeter, in their classic Citroen DS, towing their holiday caravan behind them.

Camping at Woodbury, near the showground, they are at the show today on the Crash Box and Classic Car Club stand.

The club has members from across Devon, who brought their cars to show off to visitors over the three days of the show.

Reny explained that they often spent their holidays in Devon.

The hydraulics in their car allowed for a very smooth ride, making it ideal for a cross-country trip, despite its venerable age.

Reny said: ‘We like coming to England and my husband is keen on classic car shows. We wanted to go to Devon and we were invited to come along to the Devon County Show.

‘Our car is a Citroen DS from 1971, so it is 51 years old and it is still driving very well. My husband restored it. We are on holiday here and we are staying at a campsite nearby.’

She added: ‘The English people enjoy the old things, they cherish them, that was new to us, so it is very nice to come to England.’

Cees said he was enjoying showing off the car, and meeting other owners with a passion for all things vintage.

‘In Holland, it is more, ‘why does that bit not match?’’ that sort of thing.’

The vintage car stand is run by Mike Dalby from Uffculme, of the Crash Box and Classic Car Club, which has members across Devon. Cars on display ranged from 1930 right up to the 1970s and 80s.

Mike himself had brought along his 1930 MG Midget.

‘I bought it in about 2004 and I have been destroying it ever since,’ he said. ‘I drove it up to the Lake District in 2016 and to Cheltenham in 2018. It does about 40mph uphill and about 50mph downhill. We go on the wiggly roads. I drove it down to the show on Wednesday from Uffculme.’

He said that he had decided to widen the scope of the ‘vintage’ right up to the 1980s.

‘Originally I wanted pre-war cars here and I was trying to get mainly pre-war cars but somebody said to me people want to see cars that their grandfather drove or their father drove or cars they remember as a child. So we decided to have some more modern cars which is why we went from the 1980s. We even had a 2004 Renault here on Thursday, they only made a handful of them.’

4 September 2022
We use cookies on our website to give you the most relevant experience by remembering your preferences and repeat visits. By clicking “Accept All”, you consent to the use of ALL the cookies. However, you may visit "Cookie Settings" to provide a controlled consent.
Cookie SettingsAccept All
Manage consent