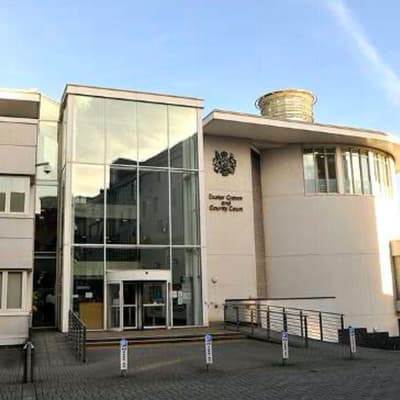 A DEALER who was part of a £500,000 cocaine gang that operated in a village rectory has been ordered to repay just a fiftieth of the cash he made from the racket.

Julian Eslick acted as a salesman for the father-and-son pair who ran the cocaine ring from a Church of England owned property in Ide.

Judge David Evans ordered him to hand over the money within three months or face a further five months in jail.

He has already served the four year sentence imposed when he admitted conspiracy to supply class A in 2020, having been released at the half way point.

Mr Nigel Wraith, prosecuting, said the figures had been agreed and the money is either already in the hands of the police or in a frozen Monzo bank account.

Miss Bathsheba Cassel, defending, did not oppose the order.

The gang were caught because villagers reported suspicious activity in Ide during the first lockdown in 2020.

Neighbours tipped off the police about cars visiting the former vicarage and seeing Purdy’s son walking to nearby woodland where he stashed huge packages of cocaine.

The gang also used an outbuilding at nearby Stevens Farm to store cocaine which they diluted to increase their profits and packaged to look as if it was still top quality gear.

Purdy and his son used local drug dealer Eslick to sell at least £160,000 of cocaine in and around Exeter, roughly half of which was paid into their joint account by bank transfer.

They used a lockup in Water Lane in the centre of Exeter as a workshop to cut and re-press the cocaine using a hydraulic press. The adulterated it with a cutting agent to reduce its purity from 90 to 70 per cent.

The two Purdys set up the supply business while living in Water Lane, Exeter, before moving to Ide in March in March 2020.

There were regular visits from Eslick’s white Mercedes and the array of cameras at the house also raised eyebrows with locals.

Jake Purdy became aware that villagers were watching the operation and sent messages encouraging Eslick to be more careful.

Police saw Jake Purdy meet Forbes on May 11, 2020, and direct his car to the large consignment of drugs which he buried in the woods. They were found to be almost exactly two kilograms.

The courier Forbes was stopped on his way home with £75,000 cash in a bag in the passenger footwell. Lester Purdy was found with £4,000 cash and a quarter of a kilo of cocaine at the house.