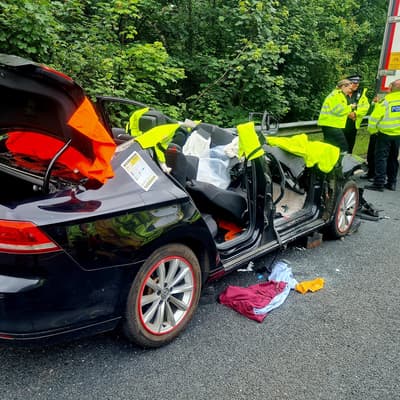 FIREFIGHTERS from Buckfastleigh and Ashburton dealt with a serious accident on the A38 Devon Expressway this afternoon, Tuesday.

Crews from both stations, with colleagues from Ivybridge and Middlemoor, were mobilised following a collision between a car and an articulated lorry on the westbound carriageway near Ivybridge.

Fire crews found the car to be wedged underneath the rear of the lorry with the male driver trapped.

Firefighters decided to free all items from the lorry and then gently move the lorry forward and free from the car. Once this was done emergency crews removed the roof and doors from the car and freed the driver who had received a number of injuries. Throughout the incident the driver was constantly monitored and cared for by members of the Devon Air Ambulance and paramedics.

The casualty was able to walk with help from his car to an awaiting ambulance.

The A38 was re-opened shortly before 6pm.

29 June 2022
We use cookies on our website to give you the most relevant experience by remembering your preferences and repeat visits. By clicking “Accept All”, you consent to the use of ALL the cookies. However, you may visit "Cookie Settings" to provide a controlled consent.
Cookie SettingsAccept All
Manage consent