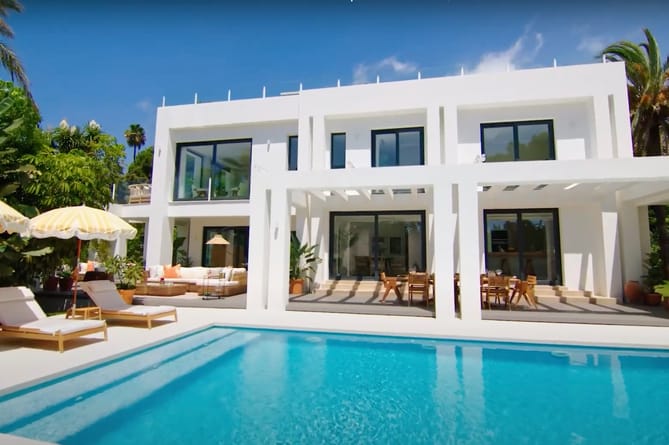 A lucky Devon grandfather has won the keys to his multi-million-pound dream villa in Spain – for just £25 – as part of a charity prize draw.

Mark (57) has won the first ever Omaze Million Pound House Superdraw – a stunning three-story, four-bedroom luxury villa in the holiday hotspot of Marbella – Omaze’s first house draw outside the UK.

Mark had entered nine previous Omaze Million Pound House Draws since the fundraising platform launched in 2020 – and said the Marbella villa was a case of tenth time lucky for him whilst exclaiming his persistence paid off” now he’s won his “such a marvellous property.”

The couple have lived in their current family home in Devon since 2019 with two rescue dogs – Asterix (Deerhound x Lurcher), Luna (Wheaten terrier) and Dillan the cat, also rescued.

A stunned Mark said: ‘I couldn’t believe it when Omaze called me to say I’d won the grand prize, I was out of the country with work so called my wife straightaway – she was even more flabbergasted than I was as she had no idea I’d even entered!

The Marbella villa won by Mark ( )

‘I’d entered nine Omaze draws before this, so my persistence has certainly paid off – it’s tenth time lucky I guess! You never imagine you’ll end up winning, but even if you don’t win anything, you’re still helping a really good cause – such as Teenage Cancer Trust.

I’d never won so much as a church raffle before, so this is truly mindboggling. This win is lifechanging for the whole family, the £250,000 cash provides peace of mind in these challenging times – I’m still pinching myself.’

Mark is free to either holiday in the house, rent it out or sell it. If he does decide to rent it out, local estate agents estimate that the property could achieve more than £100,000 a year from rentals.

This is the second time Teenage Cancer Trust has partnered with Omaze. They were the fundraising platform’s first charity partner when it launched in the UK in 2020, with that campaign raising £250,000 to help ensure that young people with cancer didn’t face the coronavirus pandemic alone.

Paul McKenzie, Director of Engagement, Teenage Cancer Trust, said: ‘The £800,000 raised is truly staggering and we can’t thank Omaze and its community enough!

‘Everything we provide to get young people with cancer through the toughest times imaginable – our specialist hospital units, nurses and youth teams – are entirely dependent on the money we’re able to fundraise.’

James Oakes, Chief International Officer at Omaze said: ‘We’re delighted that Mark has won his dream home – and was able to contribute to this fantastic £800,000 raise for Teenage Cancer Trust in the process.

‘Omaze is a win-win for both charities and entrants. By offering incredible prizes, like this stunning villa in Marbella, we give people the chance to win the house of their dreams, while also introducing charities to audiences they wouldn’t usually be able to reach. This method of fundraising is helping to make a big difference to good causes across the UK.’

It brings the total raised for good causes in the UK by Omaze to £8.3 million.

Double the number of rail journeys made last year post-pandemic