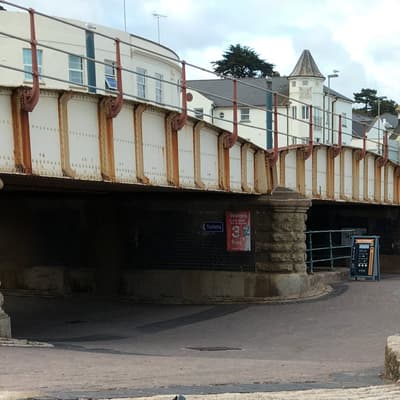 ENGINEERS are due to start work on the latest phase of the new sea wall at Dawlish.

The plans, controversially planned to take place during the summer, will mean the temporary closure of the Colonnade underpass starting the week beginning next Monday, June 13.

This will allow engineers to carry out ‘vital’ work on the second section of the new sea wall to protect the town and its iconic coastal rail line from storms and rising sea levels.

The underpass will have to be closed for up to 12 weeks, through the summer holidays, for safety reasons.

It will allow for the installation of foundations of a new bridge to connect the two sections of the new accessible public promenade and for the box culvert, through which Dawlish Water will flow out to sea.

The announcement of the work during the peak summer holiday season has sparked outrage among businesses and residents.

Engineers will have to operate large and heavy machinery to install the 20 metre long foundations which are needed due to the poor ground conditions.

This work means Network Rail say the underpass will have to be closed during construction.

Over the 12 weeks, the beach and Kings Walk promenade, opposite Marine Parade, will remain open and access will be via the stepped footbridge at Kennaway Tunnel.

Signed diversions will be in place.

Network Rail says the work needs to be carried out during the summer due to the ‘extreme weather’.

The company says this is the ‘final critical aspect’ of the work and will allow the second section of the sea wall to reopen to the public in September.

Once complete, it will link up with the first section of sea wall and allow residents and visitors to walk along a ‘wider and safer’ promenade from Boat Cove to Coastguard breakwater before continuing to Dawlish Warren along the original sea wall.

Julie Gregory, Network Rail senior sponsor, said: ‘I would like to apologise for any disruption the closure of the Colonnade underpass may cause and sincerely thank residents, businesses and visitors for their patience and understanding while we complete this critical and final stage of construction.

‘I appreciate this closure will be disappointing for the community, especially for people with accessibility needs or those with pushchairs and particularly during the busier summer months.

‘However, we will never compromise on the safety of the public or our colleagues and to ensure we remain on course to complete the second section of sea wall and open the entire promenade and both beaches in September, it is imperative this work is completed now.

‘Every effort will be made to complete this work sooner where it is safe and possible to do so.’

Network Rail says if there are times during construction where the underpass can be safely reopened, it will be.