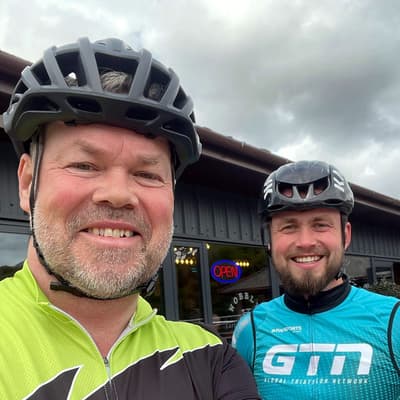 A FATHER and son are gearing up for a mammoth cycle in May in aid of homeless veterans.

Steve Gaskell from Newton Abbot, a former Captain of The Princess of Wales’s Royal Regiment, and his son, Quinn, will be taking part in a sponsored ride alongside more than 20 former servicemen in a bid to raise money for Homes for Veterans.

Quinn Gaskell said: ‘It’s a unique and great opportunity to make a difference.

‘I have never done anything like this before, I haven’t done much cycling but it should be fun and it is for a really important cause.’

A circular ride of close to 500 kilometres, the Race to the Sun Gibraltar 2022, spans a five day period and will see riders ascend more than 8600 metres through the mountains of Andaluca in southern Spain.

Beginning on Saturday, May 14, the group of 24 veterans will cycle from Gibraltar Rock through Spain and back to the Rock to raise both awareness and funds for socially excluded and homeless veterans.

On his JustGiving page, Steve said: ‘Being a veteran and having served in many challenging situations and having been a welfare officer, I know all too well difficulties veterans can face.

Alabare’s Homes for Veterans provides supported accommodation to British Armed Forces Veterans who are homeless or at risk of becoming homeless: Alabama is a charity that supports vulnerable, homeless and marginalised people.

Geraldine Gaskell, mother to Stephen and grandmother to Quinn, said: ‘I’m very proud of Stephen and Quinn and the two of them doing it together, it’s quite something and where they’re going and what they’re doing is amazing.

‘It’s for a cause that is very close to our hearts.’

Steve and the team have a variety of armed service experience everything from special forces and infantry to engineers and officers: the team will be atop the saddle for six to eight hours per day all the while the summer sun bears down upon them.

Signing up in 1985, Steve served 28 years in the armed services, working his way through the ranks to reach Regimental Sergeant Major before being commissioned. He resigned from his commission in 2013 to start his own business as a High-Performance Business Coach. He is a former chairman of the Newton Abbot Chamber of Commerce.

For those wanting to support Steve and Quinn you can do so by visiting Steve’s JustGiving page here: www.justgiving.com/crowdfunding/steve-gaskell-racing-for-the-sun