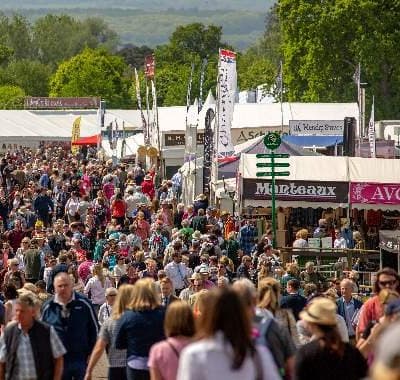 DEVON County Show is delighted to report that ticket sales hit their targets for 2022 Show.

The show took place for the second consecutive year in high summer, running from June 30 to July 2.

Sam Mackenzie-Green, Devon County Show manager said she is pleased that the mammoth team effort required to put on a show of this scale has paid off.

‘We knew it would be a challenge with the economy as it is but we also had to wrestle with the unpredictable British weather.  What’s clear is that the Devon show going public simply won’t be deterred and they turned out on the showground in their droves.’

Thursday has historically been the busiest day and is mostly frequented by the farming community, with the agricultural roots of the Show top of the agenda.

It was on this day that the winner of the South Devon Herd Book Society’s National Champion was revealed as Z Foxhole Clover owned by mother and daughter team, Margaret Plain and Alex Riches.

A total of 1500 sheep turned up on the showground to compete in a variety of classes, including two new ones for 2022, Dutch Spotted and British Rouge.

‘We also had Channel 4 News broadcast live from the showground for the first time with a lively debate hosted by Cathy Newman.’

Day two was a much-improved picture weather-wise, mainly overcast with a few light rain showers –but ideal temperatures for livestock and perfect for the show-jumping events in the main arena.

Saturday was the day that really delivered in terms of visitor numbers with avenues thronged with show-goers enjoying the party-like atmosphere, and the huge variety of trade stands on offer which were back up to pre—Pandemic levels.

‘Traders also reported buoyant business, particularly on the third and final day. This was also the day we were delighted to welcome 89 Ukrainian visitors onto the showground,’ said a spokesperson.

‘We are ever grateful to each and every one of our Devon visitors as well as our incredible volunteers who have helped to make this show such a success concludes Sam.  And we can’t wait to do it all again next year!’

Devon County show has traditionally been the first County show on the agricultural show calendar.  It will once again take up this mantle when it reverts to its May dates for 2023.  The dates have now been confirmed as Thursday, Friday and Saturday 20 May 18, 19 and 20.

6 July 2022
We use cookies on our website to give you the most relevant experience by remembering your preferences and repeat visits. By clicking “Accept All”, you consent to the use of ALL the cookies. However, you may visit "Cookie Settings" to provide a controlled consent.
Cookie SettingsAccept All
Manage consent