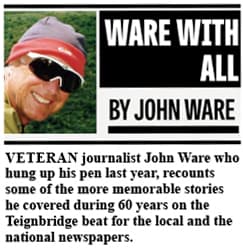 IT made headlines in October 1986 when two Tory Dawlish councillors left town to live near each other in the New Forest area, creating a mini scandal.

Douglas Mugford and his ‘close friend’ Barbara Criddle told friends they did not intend to return to the resort to live.

Prominent town and county councillor Mary Bealey, who succeeded Mr Mugford as chairman of the local party, said: ‘I am concerned about this because they are both Conservative councillors, and this does not do the party any good at all.

‘If they have no intention of returning they should both do the honourable thing and resign.

‘It would not be fair on the electorate if they kept going until the next elections in May by merely popping back to the occasional town council meeting to prevent them from being expelled.’

‘I am not at all interested in their private lives, but they are councillors and think it is intolerable they could contemplate living miles away from Dawlish and remain on the council.

‘People have a right to expect their elected representatives to be in the town. They cannot do the job from Hampshire. At the moment other councillors are having to do their council work for them.’

Cllr Mugford, a widower,  who was chairman of the Teignbridge constituency Conservative party and mayor of Dawlish in 1984-85, is a staunch churchgoer and a governor of Dawlish School.

Cllr Criddle is separated from her husband Maurice.

After the news of the runaways broke, the pair announced they were resigning from the council.

‘Cllr Mugford added: It is well known in Dawlish that my daughter Karen has bought a hairdressing salon in Hampshire.  It is a part of the country I like and I have moved there to support her.

‘It was my intention to commute and support the mayor as often as possible. I was specifically asked by councilors not to resign and cause a by-election.

‘But in view of the media coverage over the weekend I have now sent in my resignation to the town clerk.’

Cllr Criddle said she had also sent a letter of resignation, and added: ‘I have gone away to sort out personal problems.   I would have preferred the town council had been informed of my resignation before it was made public.’

Mr Criddle who was living in the Newton Abbot area would not disclose his wife’s whereabouts, and did not want to comment on the matter.