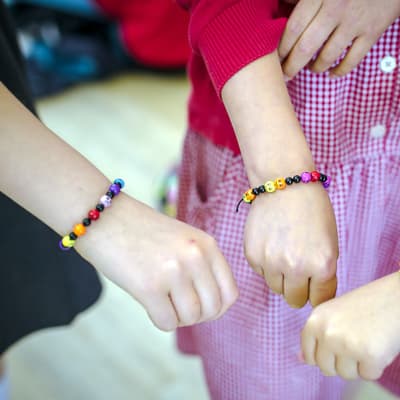 Nearly 300 primary school children from across the county attended a special event to boost their mental health and wellbeing at Buckfast Abbey.

The Take5 Festival on created by the Abbey’s Education Department, saw hundreds of key stage 2 pupils visit the abbey for a series of fun, practical and engaging workshops focusing on emotional, physical, spiritual and mental health.

During the day, pupils participated in three workshops which included a physical, reflective, and craft-based activity such as Taiko drumming, walking a prayerful labyrinth, kite making, Forest Chi, walking with gentle therapy alpacas and making wristbands to help children explore their emotions and learn how to deal with them.

Alison Gagg, the abbey’s education manager, said: ‘This year’s festival was the first multi-school event that we’ve been able to host since December 2019.

‘It was delightful to see so many children at the abbey again, bringing with them such a lot of energy and excitement. Their teachers were also full of praise about the event, with many of them asking to secure their space for next year before the day was even over.’

Led by the Abbey’s experts in children’s wellbeing the Take5 Festival is based around the five actions that promote wellbeing, which are ‘give’, ‘take notice’, ‘learn and create’, ‘be active’, and ‘connect’.

The abbey received a ‘staggering’ level of interest from primary schools in Devon wishing to attend this year’s event and places were allocated on a first-come-first served basis. The schools who were unsuccessful in securing a place for this year’s festival have been added to a list for next year’s event.

Alison concluded: ‘It’s easy to forget how difficult the past couple of years have been for school children, with the impacts of Covid being the cause of many new anxieties and worries. It’s really important that we continue to support schools in their provision for children’s general wellbeing. We hope to continue running the festival for many years to come, alongside setting up smaller, individual wellbeing workshops throughout the year.’

Getting close to the subject

Driving force Sam invites you to the greatest show