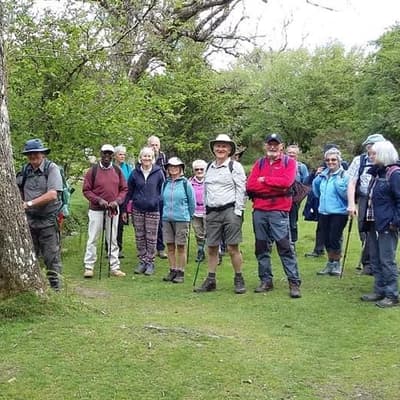 There was great turn out for Terry and Linda’s walk on Tuesday.

In in glorious sunshine the walk started near Haytor. Easy walking across Haytor Down soon brought the group to Black Hill before dropping down to the hamlet of Leighon.

A climb up to Greator Rocks was rewarded with fantastic views from Holwell lawn, before descending to the Becka Brook valley.

The group couldn’t resist the opportunity to take a group photo at the attractive new clapper bridge over the stream before climbing back up to Haytor and the completion of the seven mile walk.

On Wednesday Graham James led a select group of Newton Abbot Ramblers from Stowford Bridge and past Stowford Mill.

The mill is now disused with many broken windows, but it has a fascinating history. It manufactured paper for a total of 226 years and at one time it made all of Britain’s postage stamp paper and its other claim to fame is that at one time every household in the country possessed paper made at Stowford Mill as it produced many of the government’s documents.

Longtimber and Pithill Woods were entered by following a path alongside the River Erme.

In 1980, the local community were concerned about the excessive felling of native hardwoods. Ivybridge Town Council with assistance from Dartmoor National Park and the Countryside Commission, purchased the woodland area to be held in perpetuity for the inhabitants of Ivybridge, offering walks for all, including our group.

Before long an enclosed area known as the ‘Swimming Pool’ was found. It was originally a reservoir supplying clean water to the residents of the village, before nearby Butter Brook reservoir was constructed. The early reservoir was built during 1873-74 at the request of the Ivybridge Local Board of Health. Having served its purpose the old reservoir then became a swimming pool with changing facilities and even a springboard. During the 1930s Mr Luxton, the headmaster of the Board School located close by, taught many children to swim in this pool.

During World War II, American soldiers of the 116th Infantry Regiment used the swimming pool for training prior to D-Day and it continued to be used by the people of Ivybridge until the 1960s. Sadly it is now empty and unused.

Leaving Pithill Wood a path was followed into King’s Wood and on to Harford.

Local resident Kenneth Watkins founded The Woodland Trust in 1972 as he was concerned about the plight of ancient woodland.

From humble beginnings in Harford the Trust now cares for 1,000 free public woods and have 50 million trees.

King’s Wood is part of the Hall Farm Estate which was donated to the Woodland Trust in Kenneth Watkin’s will and now provides public access.

The moor was entered at Harford Moor Gate and a steady climb led to Spurrell’s Cross.

The ancient cross is unique amongst Dartmoor crosses as the head and each of the arms has two spurs projecting from them. Continuing upwards the views really opened up and the vistas were fantastic from Ugborough Beacon, Butterdon Hill and Western Beacon.

Walks from East Allington, which nestles amongst working farms and quiet country lanes in the South Hams, do not happen very often, but Ron and Ann W had researched an excellent route.

The village is home to the Wacky Races when homemade go-karts race downhill against the clock, but on this Sunday the village looked splendid with bunting and flags everywhere in celebration of the Queen’s Platinum Jubilee.

The walk started in drizzly weather making the field paths rather wet, but it wasn’t long before the sun came out. A highlight of the walk was seeing a large rather wet hare running at top speed right alongside the group.

Bow Bridge was crossed as the group headed in the direction of Blackawton.

The Grade II listed bridge over The Gara brook has an intriguing plaque. Although the whole text could not be discerned it said that the bridge was built by someone called John in 1684. James Green, the County Surveyor of Bridges in 1809, referred to Bow Bridge as being on the “great road from Kingsbridge to Dartmouth” – hard to believe now as it is such a quiet lane.

There are always two walks on Sunday and it was a day of the two Rons as walk leaders. Ron N and Jenny led the other walk, this time from Budleigh Salterton and taking in Dalditch and Squabmoor.

The group were fascinated by the iron work sculptures imaginatively upcycled from items of scrap.

Careful inspection could make out snips made into figures, nails and rods welded together to make flowers and a sewing machine made into a car with a figure driving it.

The gate was a work of art incorporating wheels, springs and shears whilst the end of the house had a marble run of guttering to direct water from the roof to the ground. Quite a spectacle to behold.

For more information about the many other walks offered by Newton Abbot & District Ramblers see www.newtonabbotramblers.org and come along and enjoy good company.

28 June 2022
We use cookies on our website to give you the most relevant experience by remembering your preferences and repeat visits. By clicking “Accept All”, you consent to the use of ALL the cookies. However, you may visit "Cookie Settings" to provide a controlled consent.
Cookie SettingsAccept All
Manage consent